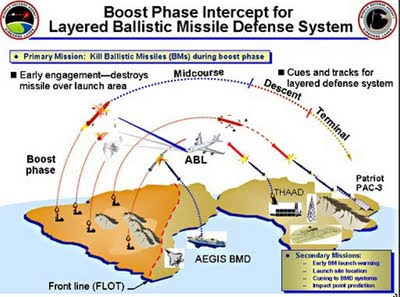 Stephen Price, former Deputy Assistant Secretary of Defense in the G.W. Bush administration and who also served as special assistant to the ambassador for Nuclear and Space Talks in Geneva, asks the question in Commentary, "Why, at a time of growing threats from unstable regimes that are testing long-range missiles and at or near nuclear status, would we spend less money on missile defense?"

Mr. Price reports that Obama's missile-defense request for the 2010 fiscal year is an outright cut of 16%--down from $9.3 billion to $7.8 billion. What’s more, the 2010 budget under funds, delays, or outright kills core programs designed to protect our homeland.

America is more at risk today than at any time during the Cold War. In 1972 only nine countries possessed ballistic missiles; today that number is more than two dozen. New nuclear actors, such as North Korea and possibly Iran and Syria, may not be deterable in the classic sense. Mutually assured destruction is useless against an enemy that does not value life. Rep. Tom Rooney, R-Fla said, “In a year where North Korea is lighting off rockets over the Pacific Ocean, the same year we're cutting our missile defense systems, just doesn't make sense to me.”

To deal with these emerging threats Mr. Price states that

"... we need a layered missile-defense system of a global, rapidly deployable sea, land, air, and space-based capability to defend against ballistic missiles. This system must be capable of defending through the ascent/boost, midcourse, and terminal phases of flight (click above chart for greater detail). It requires robust command-and-control systems and state-of-the-art network and sensor technologies."

Mr. Price asks the other question of whether Obama's hostility to funding strategic missile defense is a callback to the Reagan years when liberal democrats opposed every initiative in the realm of defense, and none more so than missile defense. On March 23, 1983, when Ronald Reagan proposed the Strategic Defense Initiative (SDI) to “render nuclear weapons impotent and obsolete,” he was met with a hail of criticism from the democratic left who were fearful of provoking the Soviets.

History has demonstrated that the left's reaction a quarter century ago was shortsighted and foolish. The Reagan administration’s insistence on pursuing SDI was the final blow to the inflexible Soviets. In the years since Reagan unveiled SDI it has succeeded numerous times, has proven its value and has had consistent successes in testing and real-world successes with the Patriot and Arrow systems.
Mr. Price concludes that,

"Congress should restore the proposed missile defense cuts and support test and deployment of needed systems. If it doesn’t, the political argument that Democrats are soft on defense will once again have real teeth. And it will have teeth because what Obama has already done and what he proposes to do have made and will make America unambiguously less safe."

Posted by Dennis Gallagher at 10:21 AM