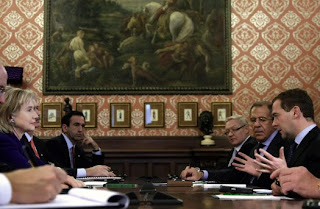 Secretary of State Hillary Clinton met earlier this week with Russian Foreign Minister Sergey V. Lavrov and President Dmitri A. Medvedev seeking Russian support for tighter sanctions on Iran. This meeting was prompted by Mr. Medvedev's statement at the the opening of the UN General Assembly three weeks ago when he said “sanctions rarely lead to productive results, but in some cases, sanctions are inevitable.” After that remark White House officials could barely hide their glee. “I couldn't have said it any better myself,” a delighted Michael McFaul, Mr. Obama’s senior adviser for democracy and Russia, told reporters after the meeting.
So on the heels of her Russian advisers "glee" Secretary Clinton travels to meet with the two Russian leaders to discuss the details of Iran sanctions and what was their response? Russian Foreign Minister Sergey Lavrov responded by saying, "At the current stage, all forces should be thrown at supporting the negotiating process. Threats, sanctions and threats of pressure in the current situation, we are convinced, would be counterproductive.” OUCH!!!
Stephen Walt of Foreign Policy states,

"The Secretary of State of a great power shouldn't be flying off to foreign capitals with the diplomatic equivalent of a tin cup, pleading with them to comply with our wishes. You're supposed to wait until your assistants have got the deal more-or-less in place, and then you show up to make the final push and iron out the last sticky details. Either way, this just wasn't very smart diplomacy"

Charles Krauthammer in the Washington Post goes beyond just the embarrassing results of the Clinton pilgrimage. He focuses more on the "flimsy" Obama foreign policies by stating,

"But wait a minute. Didn't Obama say in July that Iran had to show compliance by the G-20 summit in late September? And when that deadline passed, did he not then warn Iran that it would face "sanctions that have bite" and that it would have to take "a new course or face consequences"? Gone with the wind. It's the United States that's now retreating from its already flimsy position of just three weeks ago. We're not doing sanctions now, you see. We're back to engagement. Just as the Russians suggest."


Commentary: this dangerous trend of diplObamacy naivete was fine for the Obama campaign talking points, i.e., "Me Not Bush". But the Obama goodwill tour now requires him as protector of the free world to choose between "good" and "will". As Josef Joffe point out in Commentary,

"It took Jimmy Carter until Christmas 1979, when the Soviets rolled into Afghanistan, to figure out that goodwill is not good enough. Let’s hope Mr. Obama learns faster how to shift from “good” to “will.” A reset, no matter how often, doesn’t change the reality inside a computer. The operating system remains the same."

Posted by Dennis Gallagher at 8:04 AM