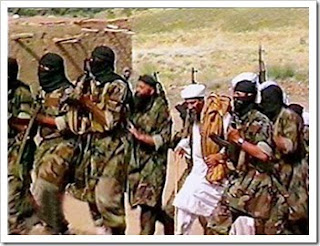 This is a follow-up to Political Policy's article regarding former Vice-President Dick Cheney's tongue-lashing to Obama on his "dithering" Afghanistan policy.
In a 10/23/09 article in Foreign Policy Jim Arkedis, Director of the National Security Project at the Progressive Policy institute and a former counterterrorism analyst with the Naval Criminal Investigative Service from 2002 to 2007, provides great insight into why the best means to disrupt Al Qaeda operations is to deny them a base of operations in Afghanistan under the Taliban's "umbrella of protection".


Mr. Arkedis puts forth 3 counter arguments to those who believe Al Qaeda can conduct operations remotely and therefore does not need a safe-haven in Afghanistan:

According to Mr. Arkedis a safe haven along the Afghanistan-Pakistan border is as good as it gets for Al Qaeda's chances to launch a large-scale attack against the United States.
Commentary: As President Obama continues to "dither" away on crucial Afghanistan troop decisions Al Qaeda continues to fortify their stronghold there. The above reinforces Mr. Cheney's comments towards President Obama's lack of courage to make the decision to heed his commander's pleas for 40,000 troops. Hanging in the balance is the safety of our Afghanistan troops and that of the U.S.
Posted by Dennis Gallagher at 1:53 PM

The dithering does give the Taliban the time to consolidate, train, and basically re-tool. The ability to strike elsewhere with great complexity and effect are an outgrowth of that dithering.

Thanks for posting this. It was informative.