al Qaeda and Taliban: A Marriage of Convenience 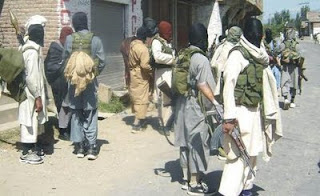 As a follow-up to Political Policy’s post entitled “Obama Naïve As To al Qaeda/Taliban Connections”, in Foreign Affairs Barbara Elias provides further confirmation as to the connections between al Qaeda and the Afghan and Pakistan Taliban. Ms. Elias asks the question, “Are the Taliban factions so closely linked to al Qaeda as to be indistinguishable from them, or can they be dealt with -- either co-opted or allowed to thrive untouched?”

“The chief objective of both the Afghanistan and Pakistan Taliban groupings is to control territory in Central and South Asia. Al Qaeda’s agenda, meanwhile, is diffuse, global, and inherently anti-American. So what has kept the al Qaeda–Taliban alliance together? The boons al Qaeda receives are obvious -- safe haven, support, and training grounds. Exactly how the Taliban benefits is less clear, especially when one considers the high costs the alliance has carried for them.”

Some characterize the al Qaeda–Taliban relationship as a marriage of convenience, in which both sides benefit for the time being but are not inextricably linked. The Taliban support al Qaeda now because they are united against a common enemy (i.e., the United States), but those ties could be severed if significant elements of the Taliban were offered the right incentives.
Ms. Elias proffers that the relationship between the Taliban and al Qaeda is rooted in more complex issues of legitimacy and identity. She states that the Taliban cannot surrender bin Laden without also surrendering their existing identity as a vessel for a stubborn and uncompromising version of political Islam. This means upholding the image that they are guided entirely by Islamic principles; as such, they cannot make concessions to, or earnestly negotiate with, secular states. Their legitimacy rests not on their governing skills, popular support, or territorial control, but on their claim to represent what they perceive as sharia rule.
In addition, Al Qaeda has provided the Taliban with support since their mutual beginnings in the early 1990s, and the organizations have fluid borders and memberships. Further, after years of fighting the United States alongside the relatively more sophisticated members of al Qaeda, the Taliban’s ideological compass has swung even further toward bin Laden and al Qaeda’s anti-American message. The main Taliban leaders will never abandon al Qaeda, and Pakistani intelligence services will not support governments in the tribal areas or in Afghanistan that do not help it in its campaign against India. Everybody in the region expects the United States to leave, just like the Soviet Union, and so allying with U.S. forces seems to them like a bad bet.
So what is the recourse for America’s defense policy in light of this convenient marriage? Since the Taliban won’t give al Qaeda up, the United States has little choice but to destroy al Qaeda, and since the Taliban cannot be meaningfully split or co-opted, Washington, unfortunately, has no real option but to prepare itself for a protracted struggle in the region.
Ms. Elias concludes that

“In addition to standard counterterrorism and counterinsurgency measures, the Obama administration should do what it can to support a viable alternative to the Taliban, its sources of legitimacy and brand of political Islam. Progress in building effective states and healthy nationalisms in Afghanistan and Pakistan is bound to be elusive. Without it, however, it will be difficult to eradicate perceptions that the conflict is one between local heroes (the Taliban) and American puppets (the Afghan and Pakistani national governments).”

Posted by Dennis Gallagher at 7:02 PM