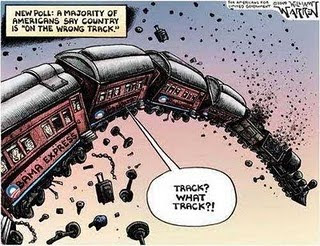 The “Obama Express” recovery plan has left the station and one wonders if it has an engineer, conductor or, for that matter, any destination other than that quaint, little socialist town called “Fraud, Waste and Abuse”.
As a follow-up to Political Policy’s article entitled “Obama's “Lazy, Hazy Math" Theorem On Job Creation", please listen to the below attached Cato Institute podcast of Veronique de Rugy who exposes the flaws and fallacies of Obamanomics, the Obama administration's gross mismanagement of the $787 taxpayer funded stimulus package and debunks Obama’s new “jobs saved” economic metric.

Upon review of Obama’s own website recovery.gov, which tracks his distribution of our $787 billion stimulus dollars and jobs created, Ms. de Rugy states that by using Obama's own data in the website there is no correlation between jobs created and state unemployment. For example, North Dakota, which has the lowest unemployment in the country per the BLS, has created more jobs than those states with higher unemployment. Either the stimulus is not working or something else is in play.
Ms. de Rugy also states that if Obama’s purpose behind his $787 taxpayer funded stimulus plan was to target those states with the lowest unemployment it has failed miserably. She states that there is no correlation whatsoever between states with the highest unemployment and those which received Obama stimulus funds. Obama’s $787 billion “share the wealth” stimulus fund is actually being “shared” with states with lower unemployment rates than those in greater need of funds.

This proves that since the Obama administration is not targeting the majority of stimulus funds to states with the lowest unemployment even the administration doesn’t buy into Obamanomics. As an editorial note either Ms. de Rugy's theory is correct or the entire stimulus plan was Obama's contribution to the greatest "pork" spending in U.S. history, which many critics believe to be the case.
Ms. de Rugy also challenges another one of Obama’s “transparency” commitments when he said that he would be “totally transparent” in the distribution of the $787 billion taxpayer funded package by making Americans aware of exactly the kind of jobs created and whether they are public or private. Ms. de Rugy counters Obama’s transparency mantra through her review of Obama’s recovery.gov. At a taxpayer cost of $18 million, recovery.gov does not inform the reader in any way as to whether the so-called “jobs created” are through public or private enterprises nor does it identify the description of the jobs.
For example, recovery.gov shows that the Brookhaven Science Association in New York received $258 million in stimulus funds, but created only 25 jobs. That is a stimulus fund: job ratio of $10 million per job!! This begs the question as to what are these jobs and why only 25 jobs with over $250 million in stimulus funding? I’m sure most of us would like to be one of the fortunate few at Brookhaven Science receiving a $10 million salary provided generously by Mr. Obama and funded by our tax dollars. Another prime example of transparency from our “Opaque Obama” presidency. Ms. de Rugy cites numerous alarming examples of the Obama administration’s gross malfeasance and mishandling of his $787 billion taxpayer funded plan and questions it's integrity, economic logic and administration.
Ms. de Rugy also addresses the new Obamanomic metric entitled “jobs saved” , which is used by the Obama administration as a metric in recovery.gov to justify its massive stimulus spending and has been widely criticized by economists as an Obama “economic ruse”. Ms. de Rugy comments that when the Obama administration pushed through his democratic Congress his $787 billion stimulus plan he promised it would cause to create 3.5 million new jobs and he knew he would be accountable for that promise. When his stimulus plan expectantly didn’t create any new jobs he created this new economic metric called “jobs saved”.
Ms. de Rugy states that “jobs saved” is an unmeasurable metric and refers to Obama’s new metric as a “brilliant trick” on the public. Ms. de Rugy is supported by her denouncement of Obama’s “job saved” metric by Greg Mankiw. Mr. Mankiw, a professor of economics at Harvard University, supports Ms. de Rugy’s assertion that Obama’s “jobs saved” metric, although a ridiculous, meaningless economic metric, is a brilliant political trick on the part of the Obama administration. Mr. Mankiw states in his blog

The ominous facts about the Obama administration's mismanagement, misdirection and malfeasance of U.S. taxpayer's $787 billion stimulus spending and it's dreadful effects on the U.S. job market presents a clear, present and dangerous predicament for the U.S. So as the ObamaExpress rolls recklessly at breakneck speed down the tracks of economic peril the only hope for Americans economic survival is that 2010 Republican victories put the brakes on before the train reaches it’s fatal destination.
Veronique de Rugy is an adjunct scholar at the Cato Institute and a senior research fellow at the Mercatus Center. Her research interests include tax competition, financial privacy, bioterrorism, and fiscal sovereignty issues. She is the coauthor of Action ou Taxation, published in Switzerland in 1996. She holds a Ph.D. from the University of Paris-Sorbonne and previously directed academic programs for the Institute for Humane Studies â€” Europe in France.
Posted by Dennis Gallagher at 5:10 PM