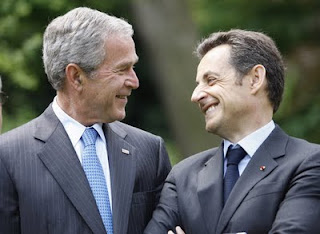 European leaders are pining for the good, old days of former President George W. Bush's commanding leadership, decisiveness, sincerity, loyalty, confidence and experience. Obama's Nobel Peace prize and high poll numbers coming out of Europe in the summer belie the reality that Obama has done much less for Europe than his predecessor.
James Joyner writes in Foreign Policy

"Despite George W. Bush's defiant "you're with us or you're against us" public stance, he actively solicited advice and input from his NATO partners. Obama, by contrast, is saying all the right things in public about transatlantic relations and NATO but adopting a high-handed policy and paying little attention to Europe. And Europe is taking a hint."

Joyner states that many working posts at the State dept. and the National Security Council have been unfilled as of yet. So it's no wonder the Nov. 3-4 U.S.-EU summit is expected to be a non-event. The preparations have thus far mostly focused on protocol rather than policy and the Europeans are particularly irritated that the luncheon will be hosted by Vice President Biden rather than the President. To contrast Obamas's interest, President George W. Bush regularly presided over this important summit.
Even in Great Britain Obama has been less solicitous of the U.S.' most natural ally than any U.S. president in memory. Obama's indecisiveness as to Afghanistan was reflected in the frustration of one European army commander, who bemoaned "Everyone is waiting for what is going to be decided in the Oval Office, without having any chance to have our say."
America's relationship with France improved after Nicolas Sarkozy was elected to replace Jacques Chirac, but Obama and Sarkozy are certainly not in sync. "Obama's policies are not the Atlanticism that Sarkozy was expecting," says Hall Gardner, a professor of international politics at the American University of Paris. Sarkozy complained at the United Nations that "President Obama dreams of a world without weapons but right in front of us two countries [Iran and North Korea] are doing the exact opposite." There are also sharp differences over troop levels and strategic objectives in Afghanistan, Turkey's candidacy for the European Union, and the future of the French nuclear arsenal.
Even lower ratings for Obama's leadership than Bush's comes from Eastern and Central European leaders. While Bush made Eastern and Central Europe a top priority, as evidenced by the missile shield in Poland and the Czech Republic and the push for NATO expansion for Georgia and Ukraine, Obama seems more concerned about relations with Russia, the very country whose influence Central Europe is trying to avoid. Obama's handling of the policy reversal on missile defense, in particular, has drawn sharp rebukes from the region, mostly on the execution rather than the policy itself. A Polish official was quoted by UPI as saying,

"Waking Czech Prime Minister Fisher at midnight European time, and calling President Lech Kaczynski and Prime Minister Tusk , who refused to take the call, 70 years to the day that Russia invaded Poland is politically inept and very offensive." Another official added, "this simply confirms how unimportant Europe is to the U.S., despite President Obama's words to the contrary."

Joyner concludes with , "It would be ironic, indeed, if the Europeans started longing for the good old days of the Bush administration. But that nostalgia is closer than you might think."
It would also be ironic if our European allies started repeating the old Clinton refrain, "I feel your pain", on behalf of the U.S.
Posted by Dennis Gallagher at 6:10 AM

It's scary when people miss Bush. I mean, he wasn't conservative, didn't reduce the size of government, and so on, but when people, ESPECIALLY people in Europe, miss him...isn't that a sign of the apocalypse?