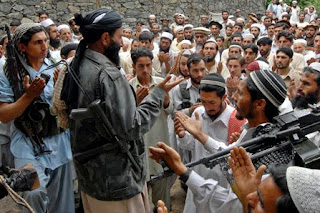 Bill Roggio reports in The Long War Journal that US military and intelligence officials are concerned that a proposed alternative plan to ramp up cross-border attacks in Pakistan and rapidly build the Afghan security forces in lieu of a comprehensive counterinsurgency strategy may take hold and lead to a catastrophic failure in Afghanistan and Pakistan. This alternative strategy, which was proposed by Vice President Joe Biden and reported in The New York Times, calls for "...reducing the US military mission in Afghanistan and ramping up airstrikes and covert raids against the al Qaeda in Pakistan’s tribal areas."


US military and intelligence officials are deeply concerned about this proposed Obama counterterrorism policy in Afghanistan. They warn that a strict focus on a counterterrorism mission concentrating on al Qaeda's leaders in Pakistan would:

US officials have warned that focusing on al Qaeda while ignoring the Taliban in both Pakistan and Afghanistan underestimates the close relationships between the groups.

"The theory that al Qaeda will not seek shelter with the Afghan Taliban ignores the very lessons we have learned since the Sept. 11 attacks," a US military intelligence official who focuses on al Qaeda and the Taliban told The Long War Journal. "If anything, the relationship between the Taliban and al Qaeda has strengthened, not weakened, over the past few years."

Taliban commander Siraj Haqqani, the military commander of the Haqqani Network, which operates in eastern Afghanistan and in Pakistan's tribal agency of North Waziristan, has close ties to both Mullah Omar and Osama bin Laden. He has recruited both foreign and local fighters to serve as suicide bombers and has employed them against Afghan and Coalition forces.

Mullah Sangeen Zadran, a senior Taliban Haqqani Network military commander made the following statement in an interview with As Sahab, al Qaeda's propaganda arm. According to Sangeen:

"All praise is for Allah, Al-Qaeda and Taliban all are Muslims and we are united by the brotherhood of Islam. We do not see any difference between Taliban and Al Qaeda, for we all belong to the religion of Islam. Sheikh Osama has pledged allegiance to Amir Al-Mumineen (Mullah Muhammad Omar) and has reassured his leadership again and again. There is no difference between us, for we are united by Islam and the Sharia governs us. Just as the infidels are one people, so are the Muslims, and they will never succeed in disuniting the Mujahideen, saying that there is Al- Qaeda and Taliban, and that Al-Qaeda are terrorists and extremists."


The close ties between the Haqqani Network and al Qaeda were highlighted in General McChrystal's assessment on Afghanistan. According to McChrystal, the Haqqanis' territories in Khost, Paktika, and Paktia provinces are ripe for al Qaeda camps.

"Al Qaeda's links with HQN [Haqqani Network] have grown, suggesting that expanded HQN control could create a favorable environment for AQAM [al Qaeda and allied movements] to re-establish safe-havens in Afghanistan," according to the McChrystal assessment.

President Bush understood the sublte connection between al Qaeda and the Taliban. The naïve Obama strategy for focusing on al Qaeda cells in Pakistan only and ignoring a counterinsurgency effort in Afghanistan against the Taliban will only serve to unite the two terrorist fronts within Afghanistan as a safe-haven. Mr. Obama's naivety in understanding the al Qaeda/Taliban connection risks American lives in the event this connection serves to create a a 9/11 redux on American soil.
Posted by Dennis Gallagher at 11:46 AM

We'll have to add this to the list. It's getting pretty long, you know?