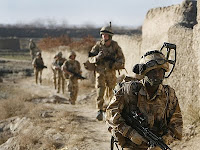 On Tuesday, December 1, 2009, President Obama will deliver his address to the world from the U.S. Military Academy at West Point to outline his Afghanistan U.S. troop strategy. A fitting and historically significant venue for him to solidify in Americans minds their confidence in him as their  commander-in-chief. For months President Obama has been brooding (former Vice-President Cheney would characterize as “dithering) over the U.S. Afghanistan strategy insofar as deploying more troops to the region. This address will be his first opportunity to show the world his mettle as the U.S. commander-in-chief; this seminal address will be President Obama’s to be or not to be moment as U.S. commander-in-chief.
Which commander-in-chief will emerge? Will Obama emerge as the inspirational, strong, decisive and confident commander emboldening our troops towards victory, reinforcing his campaign promise that Afghanistan is the "war of necessity" and intimidating our enemies a la George W. Bush? Or will he emerge as the politically expedient commander, appeasing his radical left's demands for Afghanistan cost containment at the expense of troop safety, al Qaeda/Taliban expansion into the region, disappointment to our allies who have supported our efforts in the region, and disrespect to those U.S. and allied troops who have placed their lives at risk?
Peter Feaver , in Foreign Policy, poses indices for success and failures to look for coming out of President Obama address to the world this coming Tuesday. Mr. Feaver states that,

"I am still thinking about President Obama coming to terms with being commander in chief. The roll-out of his decision on Afghan Strategy Review 2.0 will tell us a great deal about whether he is embracing the role or still struggling with it."

Mr. Feaver draws comparisons between President Obama and former President Bush and advises President Obama to follow Bush's lead in ranking his role as commander-in-chief above all other presidential responsibilities.

"President Bush was not a perfect communicator in chief when it came to explaining the war on terror. But one thing that I suspect every American, even or perhaps especially those who opposed him, understood: Bush believed that the wars he was leading were worth winning and he was willing to sacrifice the things that were his to sacrifice (things like political and public popularity) so that America could prevail in them. In other words: He embraced his unexpected role as commander in chief and ranked that above his other assignments. We will soon see if President Obama does, too."

David Broder , in the Washington Post, shares much of Mr. Feaver’s sentiments on how President Obama should portray himself as commander-in-chief. Mr. Broder advises President Obama in his address on Tuesday to show decisiveness in the face of uncertainly and courageous conviction in the face of political pressures. Broder writes,

"The cost of indecision is growing every day. Americans, our allies who have contributed their own troops to the struggle against al-Qaeda and the Taliban, and the Afghans and their government are waiting impatiently, while the challenge is getting worse. While Obama deliberates, his party in Congress shows increasing reluctance to make an all-out commitment to the war effort. The chairmen of two key Senate committees, Foreign Relations and Armed Services, are arguing for retraining Afghan troops -- if they can even be found -- and turning over more of the burden of fighting to them. Meantime, events in Afghanistan support McChrystal's prediction that delay in expanding the U.S. troop commitment will almost certainly lead to gains for the Taliban and greater risk for U.S. and allied troops."

Broder strongly encourages Obama to show his conviction to the Afghanistan effort and writes, “But George W. Bush said -- and Obama seemed to agree -- that withdrawal was not an option.”
As the President steps on to the world stage this Tuesday evening to deliver his soliloquy we await to see if the young prince will have completed his deliberations and reconciled his decision “to be” our commander-in-chief.
Posted by Dennis Gallagher at 8:31 AM