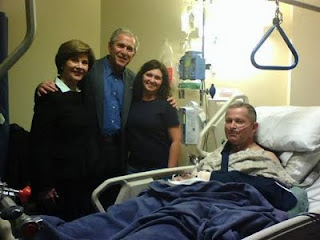 President Bush will always be remembered as one of the military's favorite Presidents. After the Ft. Hood massacre he and the former first lady secretly visited the victims of the shooting to pay their respects. As reported in "A Soldier's Perspective" on November 7,

Former President George W. Bush secretly visited Ft. Hood last night to meet with the victims of the troops affected by the recent massacre at the hands of a Muslim extremist within our ranks. This is typical for President Bush who worked hard during his presidency not to use the military for political gain, especially when it came to wounded troops and their families. He made many unannounced and unpublicized visited to military bases in and out of the country. He invited military bloggers, myself included, to meet with him one on one without fanfare or media. That's the way he was and I'm glad to see that he has continued this respect and admiration for our military".


When President Bush gave his farewell address to his troops he received heartfelt respect from his troops. Direct from the U.S. Dept. of Defense's website are the following testimonies from our servicemen at former President Bush's farewell address to the troops at Andrews Air Force base on Jan. 20,2009:
Air Force Col. Steven Shepro, commander of the 316th Wing said, “It’s like saying goodbye to an old friend.”
“We’re all here to honor our former honor in chief as he departs,” said Army Sgt. Tyler Murray, one of six members of the 3rd Infantry Regiment “The Old Guard” to serve in the joint service honor guard. “President Bush has looked out for his troops, and we’re here to honor him.”
"I’ve been involved in a lot of high-priority missions,” said Army Pfc. Jared Robison, a fellow “Old Guard” soldier. “But this one is the highest on my list, personally.”
"It’s wonderful being a part of it, especially as a military member,” agreed Air Force Tech. Sgt. Steven Hawkens, from the 316th Security Forces. “It’s breathtaking, it’s exciting, it’s wonderful to see these things going on.”
President Bush's parting comments to the troops was, "I've had a lot of great experiences as President. But none has been better than leading military members who have volunteered to serve the country in a time of danger." President Bush said he'll miss being commander in chief and being able to stand in front of the troops to tell them "how much we respect you and how much we admire you."


During the 2008 presidential campaign a Rasmussen poll showed that military veterans favored Sen. McCain over Barack Obama by 56% to 37%. So our President is already fighting an uphill battle as to our military's regard towards him. Two questions remain as to President Obama's relationship with the military, (1) where was President Obama when the hospitalized Ft. Hood military victims could have benefited from some solace from their current commander-in-chief? and (2) at the end of his Presidential term will he be viewed by the military with the same respect and regard as President George W. Bush?
The answer to number (1) is clear. President Obama doesn't seem to want to jeopardize his "politically correct" alliances with the Muslim world to be seen comforting one of their follower's victims. Maybe the answer to number (2) can be summed up in the following video, showing a cadet's reaction to President Obama's Afghanistan strategy speech at West Point, i.e., indifference.
Posted by Dennis Gallagher at 10:18 PM