How Clueless Is Martha Coakley? 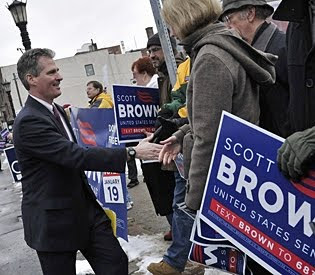 To paraphrase Elizabeth Barrett Browning, “How clueless is Martha Coakley, let me count the ways”.

(1) On Monday, January 11 at the University of Massachusetts Scott Brown and Martha Coakley held their final debate before the special election on January 19th for Ted Kennedy’s senatorial seat. Among the many issues debated that evening was the topic of Afghanistan. When Coakley was asked about her view on the U.S. prospects for Afghanistan she gave her predictable Obama “cut and run” so-called strategy, but her next comment was, well, you wouldn’t believe it if I wrote it so please view the above video to see for yourself.

(2) The extent of Ms. Coakley’s knowledge of Obama's “war of necessity” is limited to uninformed sound bites directly from the liberal “loathe the military and defense” handbook. Also, according to Ms. Coakley in order to have a strong handle on foreign policy all you have to do is “have a sister who lives overseas, and who has been in England and now lives in the Middle East." If you also have don’t believe that response either take a look at the above video.
(3) Foreign policy may not be Coakley’s wheelhouse, but she certainly is a regular J. Edgar Hoover when it comes to gardening clubs. Ms. Coakley may not be interested in waging a war against terrorism, but apparently Ms. Caokley is wasting commonwealth tax dollars waging her one woman war against gardening clubs for not filing financial disclosure forms.
(4) Also Ms. Coakley apparently has a problem even spelling the name of her commonwealth. Please take a look at the below attack ad foisted by Coakley against her Republican opponent Scott Brown. I didn’t know that the commonwealth decided to add an “e” on the end of Massachusetts. 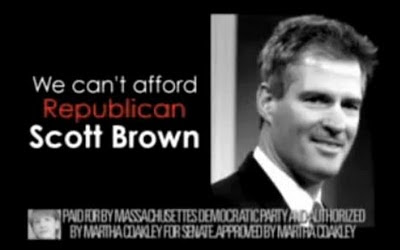 Coakley is as clueless on foreign and defense issues as she is sloppy with her spelling skills. Coakley is simply another Obamabot reciting the ultra-liberal playbook traipsed in front of Massachusetts voters as the next “expected” liberal democrat to represent the commonwealth in Congress. Her candidacy is simply another case of the corrupt Massachusetts liberal democrat machine putting forth a political puppet and taking the Massachusetts voters for granted.
If Massachusetts voters are serious about turning their commonwealth and the country around and bring it back on track this is their chance to accomplish that by voting for Scott Brown. Scott Brown, the Republican candidate for Ted Kennedy’s seat, has the following legislative agenda for the citizens of Massachusetts.
Scott Brown has received the endorsement of the State Police Association of Massachusetts, which cited his position on treating terrorists as enemy combatants and not as ordinary criminals and the Boston Herald.
It’s not too late to take back America, it's not too late to put America back on track and it's not too late to support Scott Brown. Supporting Scott Brown with your vote and/or a donation to his campaign will be your personal contribution to that end.
Posted by Dennis Gallagher at 6:54 PM