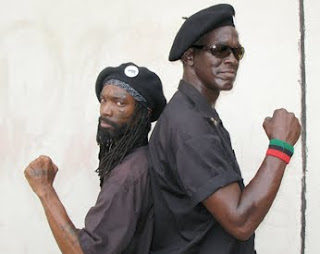 President Obama and his Attroney General Eric Holder dropped the voter intimidation case against the Black Panthers which occurred outside a polling place on November 4, 2008, election day, near downtown Philadelphia. Surprised? No, given Eric Holder's perverted penchant and sensitivity for thugs, criminals and terorists. As  reported by Michelle Malkin, Eric Holder's former law firm Covington & Burling represents 17 Yemeni nationals and one Pakistani citizen held at Guantánamo Bay. Covington & Burling’s Gitmo bar roster has included some of the most radical detainee advocates.
Bartle Bull, who is interviewed in the above by Bill O'Reilly of FOX News on this and who submitted an affidavit at Justice's request to support the Justice depts. lawsuit against the Panthers, is no conservative Republican. Bartle Bull is a former civil rights lawyer and publisher of the left-wing Village Voice and he calls the Panther's behavior "the most blatant form of voter intimidation I've ever seen". One of the Black Panthers brandished a nightstick at the entrance and pointed it at voters and both made racial threats. Mr. Bull says he heard one Panther yell "You are about to be ruled by the black man, cracker!"
In response to this incident by the Panthers the first week of January 2009, the Justice Department filed a civil lawsuit against the New Black Panther Party and three of its members, saying they violated the 1965 Voting Rights Act by scaring voters with the weapon, uniforms and racial slurs. In March, Mr. Bull himself submitted an affidavit at Justice's request to support its lawsuit.
John Fund reports in the Wall Street Journal on how Eric Holder, Obama's Attorney General, dropped the charges. Fund reports the following,

"When none of the defendants filed any response to the complaint or appeared in federal district court in Philadelphia to answer the suit, it appeared almost certain Justice would have prevailed by default. Instead, the department in May suddenly allowed the party and two of the three defendants to walk away. Against the third defendant, Minister King Samir Shabazz, it sought only an injunction barring him from displaying a weapon within 100 feet of a Philadelphia polling place for the next three years—action that's already illegal under existing law."

Outraged, the U.S. Commission on Civil Rights responded to Justice dropping the charges and voted on Aug. 7, 2009 to send a letter to Justice expanding its own investigation and demanding more complete answers.

"We believe the Department's defense of its actions thus far undermines respect for rule of law," its letter stated. It noted "the peculiar logic" of one Justice argument, that defendants' failure to show up in court was a reason for dismissing the case: "Such an argument sends a perverse message to wrongdoers—that attempts at voter suppression will be tolerated so long as the persons who engage in them are careful not to appear in court to answer the government's complaint."

So where are we now with this blatant disregard for voter rights by the Obama administration? Well, this isn't over for the Obama administration. Ryan Reilly reports in Main Justice that Rep. Frank Wolf (R-Va.) introduced a resolution on December 17, 2009 that would direct Attorney General Eric Holder to provide Congress with “all information” relating to the Justice Department’s dismissal of a case against members of the New Black Panther Party. Reps. Wolf and Lamar Smith (R-TX) have been at the forefront of congressional efforts seeking an explanation for Eric Holder's Justice dept. dismissal of this case which was a clear violation of voter rights.
As President Obama and Eric Holder have sympathies for thugs, criminals and terrorists maybe we should show a bit of sympathy for them. You see Obama and Holder are just simply too busy prosecuting heroic CIA operatives and ensuring that the 9/11 plotters and planners receive the comforts of our Constitution to worry about how their Black Panther supporters violate voter rights.
Posted by Dennis Gallagher at 8:50 AM