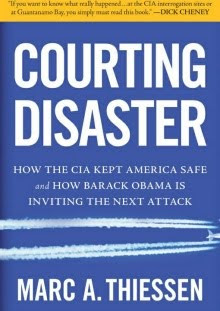 As a follow-up to Political Policy’s article dated 1/15/10 entitled "Liberal Left's Loathing of the CIA", the following is an excerpt of an essay written by Mark Thiessen entitled "Stop Blaming the CIA", which was published in The Daily Beast. Mr. Thiessen is a former speechwriter for President George W. Bush and author of “Courting Disaster: How the CIA Kept America Safe and How Barack Obama is Inviting the Next Attack”.

"The report released by the White House on Thursday, January 21, 2010 into the failure to stop al Qaeda’s attempt to blow up a passenger plane over Detroit in 2009 on Christmas day found a number of mistakes and according to the New York Times, “The report concluded that the government’s counterterrorism operations had been caught off guard by the sophistication and strength of a Qaeda cell in Yemen, where officials say the plot against the United States originated.”

In National Review’s critique of “Courting Disaster” they write that Mr. Thiessen,

“tells the story of how America's dedicated intelligence professionals went head- to-head with the world's most dangerous terrorists, got them to tell us their plans, and kept America safe for eight years, until Barack Obama exposed their secrets to the enemy, unilaterally disarmed in the face of terror, and invited the next attack. In exposing these secrets, writes Thiessen, President Obama repeated a number of lies about the CIA program -- falsehoods that have been widely echoed in the news media and have become part of the conventional wisdom. Courting Disaster challenges that conventional wisdom, and refutes the false arguments that have been made by Obama and the critics of the CIA program.”

President Obama laid blame for this failure on the agency he has put under siege since his second day in office: the CIA. “This was not a failure to collect intelligence,” he declared this week, “it was a failure to integrate and understand the intelligence we had …. That’s not acceptable and I will not tolerate it.” But Obama’s chief counterterrorism advisor, John Brennan, told a different story, acknowledging that we did not, in fact, have all the intelligence we needed: “We did have the information throughout the course of the summer and fall about … plans to carry out attacks,” Brennan said. “We had snippets of information …. We may have had a partial name. We might have had an indication of a Nigerian. But there was nothing that brought it all together.” The question is: why did we have nothing that brought all the “snippets” of information together? Within 48 hours after taking office, President Obama eliminated the only tool that would allow the intelligence community to do so: the CIA program to interrogate senior terrorist leaders. Thanks to Obama, America no longer have the capability to detain and question the only individuals who know how the information fits together—the terrorists themselves.”

For an example of liberal media falsehoods about the CIA enhanced interrogation program, look no further than the attached video of Marc Thiessen challenging, exposing and holding accountable CNN's Christiane Amanpour as one of the guilty on that score.

Political Policy advises all those concerned about America’s national security and it's systematic dismantling in the name of political correctness by the Obama administration to read Mr. Thiessen’s essay in The Daily Beast and his new book “Courting Disaster”.

Through his book "Courting Disaster" Mr. Thiessen has performed a great service to his country by exposing the inherent dangers posed by the Obama administration’s naive, corrupt and incompetent national security policies that undermine America's national intelligence agencies and it's homeland defense.

Posted by Dennis Gallagher at 10:27 AM