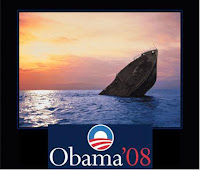 The Obama ship of fools has caught a big leak in her hull and it appears to be irreparable. So let’s take a look at the damage. Pop quiz. Whom do you guess made the following statements about President Obama?

Answers:
A. Rush Limbaugh
B. Sean Hannity
C. Glenn Beck
D. Howard Fineman
Remember those school days where, if we didn’t study, this was one of those questions where we have to guess that Howard Fineman is either the toss-out answer or possibly THE answer. Well, if you haven’t studied for this question, hopefully you guessed “D”. Yes, Howard Fineman IS the correct answer.
Howard Fineman made the above remarks about President Obama as recently as Oct. 5, 2009 in Newsweek. Howard Fineman, the resident liberal scholar at MessNBC , which by the way is now in partnership with Airhead America ( a marriage made in Marxist Moscow) and Newsweek, the liberal elite’s favorite bathroom reading material.


There’s more. In the December 31, 2009 issue of Newsweek Fineman said the following about President Obama’s crusade to socialize health care in the U.S.,

“The result is a 10-year, trillion-dollar contraption full of political risk and unintended consequences for a health-care system that constitutes one sixth of the economy. Many of the people who will benefit directly from the reforms, the uninsured, don't vote. Insurance premiums will continue to shoot up for most of us; Democrats fret that they will be blamed for those increases in the 2010 elections. Some regulations on the industry kick in immediately, but most don't begin until at least 2013. And yet, to allow the bill to "save" money in the first decade, most new taxes and fees go into effect immediately. "We're collecting money before we're giving all the benefits!" lamented a Democratic senator facing reelection. "That is a political disaster."

Fineman went on to say this about President Obama’s disastrous handling of his health care proposal giving cause to cast doubt on his chances for a second term ,

“For now, he is safely behind a blast wall, since many of the law's features wouldn't come into play until his second term, if he has one.”

If the above remarks were made by the likes of Limbaugh, Hannity or Beck liberals would dismiss them as typical conservative idle chatter. But coming from Fineman (the anti-George Will /Charles Krauthammer), these remarks are atypical, aliberal, about as idle as a runaway freight train and speechifying. Given Fineman’s dead-on summary of Mr. Obama’s narcissistic ways and his mismanagement of his own agenda, Limbaugh, et al should hire Fineman’s people to ghost write their scripts.
Even former stalwart congressional democratic leaders who stepped on board the Obama ship of fools such as Nancy Pelosi are distancing themselves from Captain Obama. As you can see in the above video Ms. Pelosi, when asked about a letter from C-SPAN CEO Brian Lamb urging congressional leaders to open up the health care negotiations — a move that would make good on Obama's campaign promise — Pelosi shot back: "There are a number of things he was for on the campaign trail." Talk about a rat jumping ship on the Obama Titanic.
And how many democratic incumbents have decided not to run for re-election in 2010? As of this count in the House 10 Democrats, in the Senate four Democrats and, among governors, three Democrats. Almost as many republicans have decided to do the same. But one wonders that if democrats were so confident and assured of the success of President Obama’s policies and initiatives to date and thought they were so in sync with America’s demands to address it’s challenges, why would they then be jumping ship? Another pop quiz question, but this answer is too involved for a multiple guess, so break out the blue books.
As the Obama Titanic slowly sinks into it’s sea of socialist, anti-American agendas and it’s panicky crew rushes for the life jackets and boats, we will wait and see if President Obama adheres to the old naval adage, i.e., “Will the Captain go down with the ship?”
Posted by Dennis Gallagher at 5:29 PM

When it looks grim, and all his allies have abandoned him, who will Obama blame?