President Obama's State Of The Union Address: Bullying On The Bully Pulpit 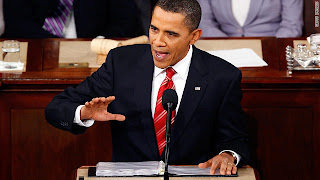 President Obama needs to learn to play nice in the sandbox and not bully his playmates. At least that is the message America needs to send to Mr. Obama after his first State of the Union (“SOTU”) address on Wednesday, 1/27/10. In 2009 President Barack Hussein Obama, the leader and most powerful figure of the free world, had the gift of a super Democratic majority in the House and Senate upon taking occupancy in the White House and was the darling of the national and international press corps. And what did he accomplish over his first full year in office with that massive front line? A hopeless agenda of anti-American change rejected not only by the American people and the GOP, but by his own party.

So in the President’s SOTU address whose fault is that? According to President Obama it’s everyone’s but his. Throughout his 70 minute SOTU tirade he kicked, yelled and pointed his finger at former President George W. Bush (surprise, surprise), both parties of Congress, the Supreme Court no less, lobbyists and the American people to let them know as much. One only wishes President Obama would express such exuberant passion against terrorists, praising our country and for growing the economy as he does when he doesn’t get to play with all his toys.

Peter Wehner in Politics Daily has this to say about the President’s address,

“The speech was defensive and petulant, backward-looking and condescending, petty and graceless. He didn't persuade people; he lectured them. What was on display last night was a man of unsurpassed self-righteousness engaged in constant self-justification. His first year in office has been, by almost every measure, a failure – and it is perceived as a failure by much of the public. Mr. Obama cannot stand this fact; it is clearly eating away at him. So he decided to use his first State of the Union to press his case. What he did was to set back his cause.”

The most glaring example of Mr. Obama’s petulance in his address was his unprecedented unpresidential and disrespectful dressing down of the Supreme Court, compounded by that he didn’t even have the facts correct in his condescension to the Court, as evidenced by Justice Alito’s reaction to the President’s remarks (see video below).

America has in their midst a President who has been coddled and entitled his entire life. From affirmative opportunity entrance to Harvard law school preceding a mediocre college career, an undistinguished law professor and “present voting" Illinois state senator career that led to his “empty suit” 304 day stint as Illinois U.S. Senator, Barack Obama has always been provided all the toys he wanted without earning the right to have them. Now he doesn’t quite understand why, as President, that the yellow brick road that guided him to the presidency has turned rusty and riddled with such obstinate obstacles as the U.S. constitution, bill of rights, freedom of speech, good old fashioned American capitalism and pesky Republican victories in New Jersey, Virginia and Massachusetts. Well, Mr. Obama, you’re not in Chicago anymore.

A bully’s tactic is overtly premised on fear and intimidation to accomplish their goal, but is covertly driven by insecurity and inadequacy. In President Obama's address he attempted to convey fear to the American people if they did not support his domestic agendas and intimidation to Democrats and Republicans alike if they didn’t earnestly work towards enacting said agenda. But what drives his fear and intimidation is his miserable failures as a first year President as evidenced by American tea party and Washington march outcries and even a lack of confidence in his agenda by his own super Democratic majorities. 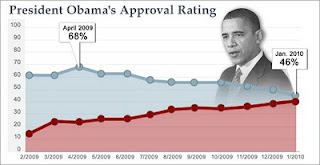 President Obama’s first full year in office has been remarkably dismal and is reflected in his polls showing, according to Gallup, one of the lowest average approval ratings for a first year President in over 50 years. After a full year in office the President has managed to create unprecedented national debts and deficits, record breaking unemployment, imposed anti-capitalist tax laden and failed stimulus spending, held hostage important initiatives while promoting a failed socialist and unconstitutional $2.5 trillion health care agenda, employed socialist/government takeover of American industries, dismantled and compromised national security measures and enacted policies that provide more leniency to terrorists than America’s own intelligence agencies. Ergo, are we surprised by the poll ratings?

Mr. Obama doesn’t accept those ratings nor does he accept that his playmates, Congress, the Supreme Court and the American people are not entitling his failed agenda. So in his SOTU does Obama take a page from former President Clinton’s playbook in 1994 when Democrats lost the House and show America he gets it, have a “lesson learned” and pivot to the center away from his socialist/progressive agenda? No, his choice is NOT to listen, but to arrogantly bully, cajole, intimidate, strike fear and blame Washington for the very same old and cold tactics of influence that he campaigned to “change”.

But who is Washington? President Obama IS Washington and his presidential promise to change its old ways cloaked in a marketing message of “hoax” and change” has been exposed. In the President’s SOTU address he put lobbyists on the chopping block by saying,

“We must take action on both ends of Pennsylvania Avenue to end the outsized influence of lobbyists...that's why we've excluded lobbyists from policy-making jobs or seats on federal boards and commissions."

However, as reported in The Hill, within 24 hours of that comment the administration invited those very same lobbyists he threw under the bus in his SOTU address to participate in a series of off-the-record conference calls with senior officials to discuss a range of topics; a prime example of the hypocritical behavior of an intimidating bully who desk pounds “do as I say, not as I do”.

America and President Obama would like to put behind us his connections to his ACORN, Saul Alinsky and Bill Ayers days of years past that trained him in the tactics of intimidation and fear. The “hope and change” President Obama campaigned on is not a wish for America, but one America wishes for Mr. Obama. For America wishes and hopes he will change his philosophical approach to his presidency and come to the realization that he represents all Americans, will put forth policies to utilize America's unique platform of opportunity for success and capitalize on those building blocks to improve America's status.

But if President Obama continues his socialist agenda grounded in American resentment employing ACORN/Alinsky bullying tactics his presidency will be lame-duck long before its time.

This is because, in the end, bullies never win; they are simply exposed for what they are.

The below is the GOP response to the President's SOTU address, ably delivered by newly inaugurated Virginia Gov. Bob McDonnell
Posted by Dennis Gallagher at 10:03 AM

Check out our COMMUNISTS IN THE US GOVERNMENT News and Reference Site: http://www.commieblaster.com

Facts organized all in one location. Obama, New Party, Ayers, Dunn, Jennings, Jones, Sunstein, Jarrett, Lloyd, Wright, School Indoctrinations, Soros, Cop-Killers, Cuban Spy Rings, Commie Media, Misinformation, Congress Investigation, plus details on Socialist/Communist Members of Congress like Nancy Pelosi, Barney Frank and over 80 others. Listen to Soviet Spy defector explain how communist takeovers are performed and Reagan's guidance on dealing with Communists. Learn what a Socialist, Communist and Progressive is. Examine ACORN, SEIU's and Union Communist leaders. See FBI files and testimonies. Catch up on Takeover News and study a Communist Takeover Plan from the 1960's, along with how to resist. Videos, links, pdfs.

Commies can run, but they can't hide! - http://www.commieblaster.com

Excellent article. You nailed it.

That is right on. How can he expect respect when he dresses down the Supreme Court in public. This is indeed very bad behaviour. This is not what he promised me he would do once he was elected to be President.