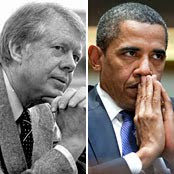 Could President Obama’s “straddling the fence” approach to foreign policy cause him and America to suffer the same consequences of the failed Carter administration’s policies? Further, could his approach ring a death knell for future presidents who embrace such a cautious and somewhat incoherent tact to foreign policy?

Walter Russell Mead, in his essay entitled “The Carter Syndrome” published in Foreign Policy, addresses these and other questions through a comprehensive review of past president’s struggle to strike the right foreign policy balance. Mr. Mead identifies the foreign policy dilemmas posed to President Obama through the prism of four schools of thought; Hamiltonian, Jeffersonian, Jacksonian and Wilsonian.
Mr. Mead cautions President Obama if he continues to send mixed signals as to his foreign policies. The ramifications will affect American interests and ultimately his presidency.

“Neither a cold-blooded realist nor a bleeding-heart idealist, Barack Obama has a split personality when it comes to foreign policy. So do most U.S. presidents, of course, and the ideas that inspire this one have a long history at the core of the American political tradition. In the past, such ideas have served the country well. But the conflicting impulses influencing how this young leader thinks about the world threaten to tear his presidency apart -- and, in the worst scenario, turn him into a new Jimmy Carter.”

As context, the following are Mr. Mead’s general themes of the four foreign policy schools of thought.

Hamiltonians- the Hamiltonian doctrine is the doctrine that pushes the economic primacy of the United States. Hamiltonians believe that a fundamental link between the government and big business is key to the survival and success of the country. They believe that America is best served by international organizations that protect fundamentally American interests.

Jacksonians- the driving belief of the Jacksonian school of thought is that the first priority of the U.S. in both foreign and domestic policy is the physical security and economic well-being of the American populace. Jacksonians believe that the U.S. should not seek out foreign quarrels, but if a war starts, the basic belief is there's no substitute for victory.

Wilsonians- Wilsonians believe that both the moral and national interests of the U.S. are best served by spreading American democratic and social values throughout the world. They want to see the U.S. involved on a worldwide basis with a peaceful international community based on the rule of law. The United Nations is perhaps the quintessentially Wilsonian creation.

Mr. Mead characterizes Mr. Obama’s foreign policy philosophy, as former President Carter’s, largely as Jeffersonian (which is no bed of roses) tinged with a Wilsonian view of U.S. social and democratic idealism. But can President Obama turn a blind eye to regimes that fly in the face of such Jeffersonian and Wilsonian ideals? Mr. Mead writes,

“Obama may well believe what he said in his inaugural speech -- "we reject as false the choice between our safety and our ideals" -- but as any president must he is already making exactly those tradeoffs. Why else refuse to meet the Dalai Lama? Why else pledge support to the corrupt regime of President Hamid Karzai in Afghanistan or aid Pakistan despite the dismal track record of both the civil and military arms of the Pakistani government when it comes to transparent use of U.S. resources? Did the administration not renew its efforts to build a relationship with the regime in Tehran even as peaceful democratic protesters were being tortured and raped in its jails? Is Obama not taking "incentives" to Khartoum, a regime that has for more than a decade pursued a policy in Darfur that the U.S. government has labeled genocidal? It is hard to reconcile the transcendent Wilsonian vision of America's future with a foreign policy based on dirty compromises with nasty regimes”.

“Carter faced many of the same problems, and the image of weakness and indecision that helped doom his 1980 run for re-election is a perennial problem for Jeffersonian presidents. Obama will have to leap over these hurdles now, too. The contradiction between the sober and limited realism of the Jeffersonian worldview and the expansive, transformative Wilsonian agenda is likely to haunt this administration as it haunted Carter's, most fatefully when he rejected calls to let the shah of Iran launch a brutal crackdown to remain in power. Already the Wilsonians in Obama's camp are muttering darkly about his failure to swiftly close the Guantánamo prison camp, his fondness for government secrecy, his halfhearted support for investigating abuses of the past administration, and his failure to push harder for a cap-and-trade bill before the Copenhagen summit.”

His presidential campaign over, as President Obama moves forward with his presidency he will have to make some difficult foreign policy choices that will affect his political future, the future of America,  the world’s interests, and strategic considerations of future presidents.

The stakes are high for both President Obama’s legacy, America and the world as it is in the 21st century. Cohesive and clarity are his watchwords as he molds and shapes his foreign agenda, lest he finds himself after his term cast into the bowels of political purgatory, a lonely place with only Jimmy Carter as his sole source for solace.

Walter Russell Mead is the Henry A. Kissinger Senior Fellow for U.S. Policy at the Council on Foreign Relations
Posted by Dennis Gallagher at 7:21 AM