Rep. Paul Ryan (R-WI), ranking member of the House Budget Committee and a senior member of the House Ways and Means Committee, has put forth a controversial but courageous visionary budget policy for the future. Rep Ryan’s proposal entitled Roadmap for America’s Future is a statesman-like plea to the American people for “getting real” when it comes to fiscal responsibility.

Rep. Ryan’s Roadmap is so “real” that the CBO agreed to score it against the Obama administration's fiscal policies and projections. According to the CBO scores Ryan's budget proposal moves the country in the right fiscal direction on every policy point as compared to the Obama budget projections, which does the polar opposite.

Rep. Ryan's Roadmap is fraught with tough love budgetary policies engineered to finally put America’s fiscal house in order. This Roadmap is not your typical politician’s duplicitous budget plan ripe with special interest and base-pleasing provisions that only rearranges the deficit spending deck chairs. Ryan’s Roadmap is asking Americans to make some immediate tough choices given the dire financial prospects facing all Americans as we white knuckle on the Obamanomic runaway spending express.

His plan would bend the federal debt, spending and economic curves in the opposite direction of the current administration’s projections. But, at the same, time the Roadmap requires all Americans to take upon themselves more personal responsibility for their future retirement health care and pensions through concessions in entitlement programs, the major causes and drains on public debt and spending. The provisions in Ryan’s courageous plan are not for the faint of heart, but if you really want a heart stopper take a glimpse of our future at the attached CBO analysis comparing Ryan’s Roadmap proposal to the current administrations off-the-chart trajectories of 3 key economic indicators: government spending, public debt and economic growth/capita. According to the CBO for each indicator Ryan’s Roadmap bends the trajectories in the correct dierction, i.e., the polar opposite of the Obamanomic projections. 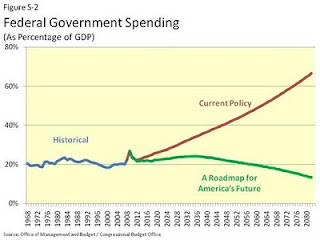 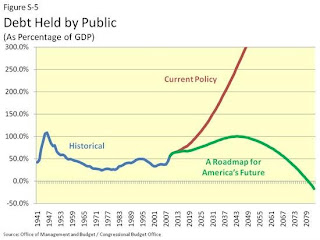 In chart 2 Ryan's Roadmap keeps debt held by the public from spiraling to unsustainable levels. Under Obama’s current policy, debt held by the public soars to the improbable level of more than 750% of GDP (though the economy would crash well before this level was reached). As CBO notes in its June 2009 "The Long-Term Budget Outlook", countries that carry debt of more than 100% of GDP must change their fiscal policies because those levels are not sustainable over the long run. The Roadmap also slows the accumulation of debt held by the public, and eventually reduces debt year-over-year beginning just before the middle of the century. 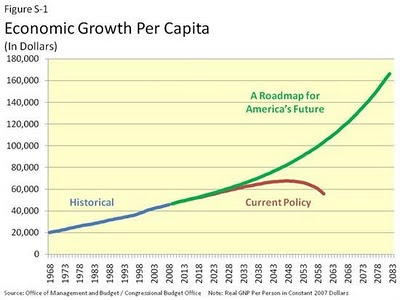 Chart 3 shows data from CBO that, under Ryan’s Roadmap, the standard of living for a child born today would double the time he or she reached middle age, just after the middle of the century. In this way, the sustainable budget path continues the American legacy of providing the next generation with the opportunity for continued prosperity. This contrasts with the Obamanomic fiscal policy, which leads to stagnant, and declining, standards of living.

In short, unlike the current Obamanomic fiscal path, Ryan's Roadmap supports the American legacy of leaving the next generation better off than it's predecessor generation. So what are the directions in Rep. Ryan’s Roadmap to point these charts in the right trajectory and arrive at our destination of fiscal sanity? Rep. Ryan gets us there by blazing a trail reshaping the three major impediments to fiscal responsibility: Medicare/Medicaid, Social Security and punitive progressive tax rates. Taking aim at controlling Medicare/Medicaid and Social Security costs is imperative to controlling fiscal spending, and this point may not be well understood by most Americans. Bruce Bartlett, a former domestic policy adviser to President Ronald Reagan and Treasury official under President George H.W. Bush, confirms this by stating,

"Many polls show that the vast majority of Americans have no idea of the true composition of federal spending. According to a recent Rasmussen survey, just 35% of Americans know that Social Security, Medicare and national defense spending constitute more than 50% of the federal budget. A 2001 poll showed that half of all Americans thought foreign aid comprised at least 20% of the budget, and the average response was 25%. In fact, foreign aid is less than 1% of the budget and has been for decades."


The highlights of Ryan's Roadmap provisions are as follows:
In addition Ryan proposes a spending freeze at 2009 levels from 2010 to 2019 for non-defense discretionary spending, which is about 1/6th of the federal budget. Political commentary reaction to Rep. Ryan’s proposal has on many fronts been laudatory and praises his proactive concern for America’s fiscal future. Ezra Klein writes in the Washington Post the following,

“…But it is also impressive. I wouldn't balance the budget in anything like the way Ryan proposes. His solution works by making care less affordable for seniors. I'd prefer to aggressively reform the system itself so the care becomes cheaper, even if that causes significant pain to providers. I also wouldn't waste money by moving to a private system when the public system is cheaper. But his proposal is among the few I've seen that's willing to propose solutions in proportion to the problem. Whether or not you like his answer, you have to give him credit for stepping up to the chalkboard.”

Robert Samuleson of the Post also praises Ryan’s courageous proposal and calls for the Obama administration to step up to the plate on a fiscal solution. Samuleson writes,

“…But the larger point is that Ryan is trying to start a conversation on the desirable role and limits of government. He's trying to make it possible to talk about sensitive issues -- mainly Social Security and Medicare -- without being vilified. President Obama recognized that when he called Ryan's plan a "serious proposal." But since then, Democrats have resorted to ritualistic denunciations of him as pillaging Social Security and Medicare. Legitimate debate becomes impossible. If Democrats don't like Ryan's vision, the proper response is to design and defend their own plan. The fact that they don't have one is a national embarrassment."


Notwithstanding the Washington Post’s support, in spirit, for Ryan’s Roadmap the question is whether it is politically feasible. The Democratic party has expectedly greeted Rep. Ryan’s Roadmap with no acceptance and no alternatives to their systematic dismantling of America’s fiscal security. The Washington Post reported that House Speaker Nancy Pelosi responded to Rep. Ryan’s proposal with her typical vacuous political (vs. statesperson) "Bush-baiting" charges by saying

"The Republican budget provides tax breaks for the wealthy, ends Medicare as we know it and privatizes Social Security. Here they go again, rehashing the same failed Bush policies."


A no-surprise political response from a no-solution leader. The Republican leadership, though, is treading cautiously around Ryan’s Roadmap and has not embraced it as expected. House Minority Leader John Boehner (R-Ohio) distanced himself from the legislation by saying "it's his," referring to Rep. Paul Ryan (R-Wisc.). Boehner emphasized the document did not have the backing of all House Republicans. Bruce Bartlett confirms both party leadership’s lack of support for Ryan’s proposal and calls for a needed public and congressional attitude transformation in order to get real about runaway fiscal spending. In Forbes Bartlett says,

“The Ryan plan is, of course, politically ludicrous. It would be impossible to get Congress to even implement one of its major provisions, let alone all of them simultaneously. And I say this as someone who in principle supports many of the ideas in his plan. For example, I believe we must raise the retirement age, and it's hard to see how we can meaningfully reform the health system to reduce cost inflation as long as health insurance is free of taxation. But I don't delude myself that it is possible to implement such changes absent a major transformation in political attitudes or conditions that do not now exist."


Bartlett’s perspective is dead on and places American attitudes towards government spending at the crossroads of fiscal ideology. As Rep. Ryan points out in his Roadmap letter to America the two paths are clear:

(1) ever-rising levels of government spending that will overwhelm the Federal budget and the U.S. economy with crushing burdens of debt and higher taxes and a future in which America’s best century is the past century or (2) a second future- one in which the principles that created America’s freedom and prosperity are restored.


Rep. Ryan has stepped out on to the proverbial political limb and bared his soul for all to see how deep his concern is for regaining America’s prosperity. His ambitious Roadmap may not be, in its totality, a politically pragmatic nor practical solution to the challenges facing America’s economic future. However it sets the pace and tone for the courageous conversation to commence.

If the Obama administration, Congress and the public have the courage to meet him half way on his Roadmap for America’s Future perhaps America will regain its path towards economic prosperity. Brave, courageous and bold expectations for all. For more information on Rep. Ryan’s “Roadmap for America’s Future” please visit its website at http://www.roadmap.republicans.budget.house.gov/.

Posted by Dennis Gallagher at 2:12 PM

The plan is bold. That can't be argued. I'll take a fuller look at it.

The CBO used Ryan's assumptions about the economy, so any comparison to Obama's projections is apples and oranges.

Moreover, the plan assumes that the only way to address health care reform is by making cuts. (I call a voucher that starts off as inadequate and then steadily erodes in value a cut. You call it what you like.)

The roadmap offers no insurance reform, and thus leaves a 65-year old in 2021 trying to purchase insurance with 6K in 2010 dollars. Good luck trying to get anything meaningful with that.

Moreover, Ryan's roadmap says nothing about improving and reforming care itself, which is where the money is. Right now, the medical system has more economic incentive to intervene in a major cardiac episode than it does to prevent the episode in the first place. Same with asthma, kidney disease, and cancer, the other chronic conditions that comprise the majority of health care spending.

What we need from our elected officials is imagination and a willingness to make systemic reforms. Getting out the axe and swinging it at old people hardly qualifies.