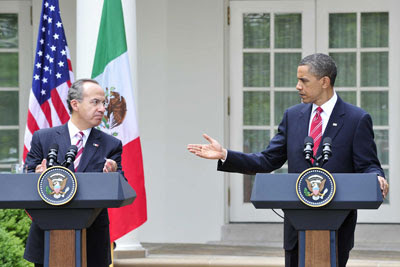 President Obama and his regime took a broad brush in 2009 travelling the world preaching his scornful attacks on America with his “Apologize for America” tour. Now President Obama is focusing on trashing individual states and he has stepped up his strategic attacks on his country by enlisting help from corrupt foreign leaders. On May 19, 2010,on the White House Rose Garden grounds no less, America’s President stood next to his tag-team immigration partner- in-crime Mexican President Felipe Calderón and in a no holds barred exhibition shamelessly attacked Arizona’s immigration law SB1070.

SB1070 is a constitutional and, according to a Rasmussen poll, immensely popular law enacted by the Arizona state legislature to, well, do President Obama’s job. The startling incongruity of witnessing these two so-called leaders lecture Americans on a law that is designed to enforce U.S. immigration law, which they ignore, was a remarkable sight. As they spewed their irresponsible rhetoric, I was waiting for the White House roses to wilt in shame.
To cloak his blatant disregard for American sovereignty our President has gone on the offensive. He has, to use his favorite word, the “audacity” to castigate Arizona in concert with his Mexican counterpart Calderón, who has contributed to Arizona’s immigration plight.

THE PRESIDENT HAS THE TEMERITY TO STAND SIDE-BY-SIDE ON HALLOWED WHITE HOUSE GROUNDS AND ATTACK ARIZONA AND PERMIT CALDERON, A FOREIGN SOCIALIST LEADER WHO IS RESPONSIBLE FOR COUNTLESS DEATHS, COST AND CRIME IN OUR GREAT AND BEAUTIFUL STATE OF ARIZONA, TO DO THE SAME. THEN HE PERMITTED THIS DISGRACEFUL PARADE OF ATTACKS ON AMERICA BY CALDERÓN TO CONTINUE IN THE SACRED HALLS OF CONGRESS. IS THERE ANY QUESTION NOW AS TO OBAMA’S AND THE PROGRESSIVE/SOCIALISTS DISDAIN FOR AMERICA?

And why did our President collude with Calderón with such a display? Simply because they are pathetically trying to hide their incompetence, malfeasance and negligence as to their respective responsibilities when it comes to enforcing immigration law (Obama) and stemming drug trade, crime and illegal immigration onto American soil (Calderón).
As the Obama/ Calderón tag team stood side-by-side, one would think they actually rehearsed their collective speeches. The President went first saying,

“We (Obama and Calderón) also discussed the new law in Arizona,which is a misdirected effort -- a misdirected expression of frustration over our broken immigration system, and which has raised concerns in both our countries. And I want everyone, American and Mexican, to know my administration is taking a very close look at the Arizona law. We’re examining any implications, especially for civil rights. Because in the United States of America, no law-abiding person -- be they an American citizen, a legal immigrant, or a visitor or tourist from Mexico -- should ever be subject to suspicion simply because of what they look like. “

The inferences by Obama that the Arizona immigration law would lead to racial profiling are disingenuous, to be kind, and an outright LIE, to be cruel and honest. So either the President has been as lax on reading the Arizona statute (like his other “crack” top officials Napolitano and Holder) as he has been on immigration enforcement or is outright lying to the American people. The Arizona statute was enacted on April 23, so we'll give the President the benefit of the doubt that he just has not had the time to read “all 16 pages” of the statute. So instead he simply made politically charged irresponsible statements attacking a state of the union to mask his incompetence and, perhaps, just perhaps, to pander to the Hispanic voter base. (Gee, would the President actually throw an entire state under the bus for political purposes? Naw, only some corrupt Chicago thug politico type would do such a thing.)
Since President Obama has neglected to correctly represent the Arizona law, to set the record straight the Arizona immigration law is extremely clear that it not only doesn’t portend racial profiling the law was amended to specifically state that fact. The Arizona law states as follows when it comes to racial profiling,

“for the enforcement of Willful Failure to Complete or Carry an Alien Registration Document, Unlawfully Picking up Passengers for Work and Unlawfully Transporting or Harboring Unlawful Aliens a law enforcement official or agency cannot consider race, color or national origin when implementing these provisions, except as permitted by the U.S. or Arizona Constitution."

When Arizona Gov. Jan Brewer signed the bill that made changes to SB1070 she was emphatic that the changes were put into law to make it a crime to consider racial profiling while enforcing the law,

"These changes specifically answer legal questions
raised by some who expressed fears that the original law would somehow allow or lead to racial profiling," Brewer said in a statement after the signing. "These new amendments make it crystal clear and undeniable that racial profiling is illegal and will not be tolerated in Arizona."

At this stage, given the multiple explanations of the Arizona legislation, we get it President. You are going to continue to misrepresent it to make political hay and to insulate your regime from its incompetent and irresponsible efforts to protect American sovereignty.
After the President finished his bashing of one of America’s great states he tags Mexico’s President Calderón to step into the politically partisan ring and issue more punishment against Arizona. Calderón, who is President of a country of which it’s capital has the dubious honor of being the kidnapping center of the world, took his turn at vilifying Arizona. Yes folks, the President of the kidnapping capital of the world goes to Washington to lecture Americans on how terrible we are when it comes to controlling crime. Only the President’s regime could dream up such incredulous political theatre. Calderón driveled on the following in the Rose Garden,

“In Mexico, we are and will continue being respectful of the internal policies of the United States and its legitimate right to establish in accordance to its Constitution whatever laws it approves. But we will retain our firm rejection to criminalize migration so that people that work and provide things to this nation will be treated as criminals. And we oppose firmly the S.B. 1070 Arizona law given in fair principles that are partial and discriminatory.”

A two-legged drop kick delivered on America by saying he (1) won’t do a thing to stop the illegal flow of immigrants to the United States AND (2) he then body slams the Arizona immigration law. Under the auspices of President Obama and the progressive/socialists Pelosi and Reid, Calderón continued his attack on America with his remarks to a joint session of Congress. Calderón won sustained support applause from DEMOCRATS in attacking the Arizona law on Capitol Hill when he said,

"I strongly disagree with the recently adopted law in Arizona. It is a law that not only ignores a reality that cannot be erased by decree, but also introduced a terrible idea using racial profiling for law enforcement."

Calderón conveniently forgot to mention in the Rose Garden and to Congress that Mexicans living and working in the U.S. transfer about $25 billion to the Mexican economy. In addition, Mexican criminals and moochers cost taxpaying citizens and legal immigrants almost $350 billion per year.
I’m sure Arizona law SB1070 is available in Spanish, but perhaps Mr. Calderón, not unlike President Obama, has not had the time to read it. I imagine instead he had the law explained to him, in their "own words", by the President and his Court--Napolitano and Holder.
If this shameful display in Congress of the progressive/socialist democratic party applauding prevaricative attacks on Arizona by this character Calderón isn’t evidentiary proof of the dangers for America lurking within Congress posed by the progressive/socialists democrats I am hard pressed to find more damming evidence.
Taking a cue from President Obama’s blame game strategy, at his joint session speech Calderón pathetically blamed America for crime in HIS country saying that the influx of assault weapons from America has contributed to Mexican crime rates. Calderon said a spike in violence in Mexico coincided with the expiration of the assault weapons ban in the U.S. in 2004,

"There is one issue where Mexico needs your cooperation, and that is stopping the flow of assault weapons and other deadly arms across the border. Many of these guns are not going to honest American hands. Instead, thousands are ending up in the hands of criminals."

“Calderón 's understanding of what the Federal Assault Weapons Ban is no more accurate than it is about Arizona's new immigration law. Let's review the assertions he made to Congress: Calderón claimed that these were "powerful weapons." It is a common misunderstanding as the "assault weapons" ban conjures up images of machine guns used by militaries. Yet the 1994 federal assault weapons ban had nothing to do with machine guns, only semiautomatics, which fire one bullet per pull of the trigger. The AK-47s banned by the assaults weapons ban were civilian, semiautomatic versions of the gun. Just as Mexican drug cartels are able to bring drugs into their country, they are also able to bring in really powerful weapons from around the world to defend both their valuable drugs as well their turf against competing drug dealers. Reports indicate that grenades and rocket launchers are not even available for sale in the United States and come from countries such as South Korea, Israel, and Spain. Two thousand two hundred thirty nine grenades were seized by the Mexican government from 2007 to 2009. Similarly, machine guns in Mexico originate from China, Israel, and South Africa. It is hard to believe that Mexican drug cartels would want to get look-alike "military-style" weapons from the U.S., when they can get the real military weapons elsewhere. . President Calderón really needs to read American laws before he lectures us about how we should change them. More worrisome, the vast majority of Democrats appeared to stand up and give him a long 20 second standing ovation when Calderón called for renewing the Assault Weapons Ban. Banning guns based on their looks and not how they function doesn't make a lot of sense for reducing crime."

Will President Calderón also make speeches before the national legislatures of South Korea, Israel, Spain, and South Africa blaming them for Mexico’s crime or does he relegate his hypocritical rhetoric to the U.S. on that matter?
Also, nobody is forcing the Mexican criminals to purchase these weapons. This crime wave falls on the head of Mr. Calderón and nobody else. Mr. Calderón should cease and desist the Obama-like blame game strategy and start looking within his incompetent administration to solve crime within Mexico. According to Reuters, the death toll from drug violence since Calderón set the army on cartels as soon as he took power in late 2006 has soared to around 23,000, with gruesome news of beheadings and torture. Mr. Calderón has no credibility to lecture the U.S. on crime control or immigration policy given his disastrous record as Mexico’s President. Before he starts up again on his lecture tour perhaps he should do some ride- alongs with Arizona’s Maricopa County Sheriff Joe Arpaio to learn some real life lessons on controlling illegal immigration crime within his own country.
The Obama- Calderón tag team was a dishonor to the the sanctity of the White House, Congress and the American Presidency. But there was one saving grace--at least the President didn’t bow.
Posted by Dennis Gallagher at 10:00 AM