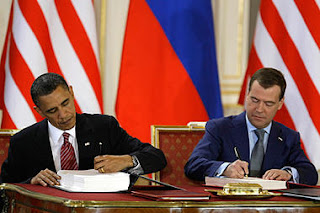 President Barack Obama “started” down another road towards his naïve kumbaya collectivist worldview. This one took him to the streets of a nuclear-arms-free world. On April 8, 2010 in Prague President Obama and Russian president Dmitry Medvedev signed the new START treaty. The new START (Strategic Arms Reduction Treaty) treaty is a follow-up to the 1991 START I treaty, which expired in December 2009, and to START II and the 2002 Treaty of Moscow (SORT), which was due to expire in December 2012.

However, given the administration’s new START negotiation treaty terms, the parties to the Treaty may want to rename it “non-START” for a number of reasons, especially because of the sacrifices to American nuclear protectionism. Under the Treaty, the Obama White House reports that the U.S. and Russia will be limited to significantly fewer strategic arms, approx. 30%, within seven years from the date the Treaty enters into force. But there is significant debate as to the bilateral aspects of the Treaty. As reported by Steven Groves of the Heritage Foundation,


“The broad terms of the “New START” treaty are (or should have been) straightforward: The U.S. will reduce a certain number of its strategic offensive arms in return for a reciprocal obligation by the Russian Federation to reduce its offensive strategic arms. The Russians, however, have agreed to reciprocate such reductions only if an additional condition is met by the U.S.—that the U.S. pursue its ballistic missile defense program only to such an extent that the Russian Federation approves, and if not, the Russians will exercise their right to withdraw from the treaty. Specifically, Russian Foreign Minister Sergei Lavrov stated that Russia would have the right to withdraw from the treaty if “the U.S.’s build-up of its missile defense strategic potential in numbers and quality begins to considerably affect the efficiency of Russian strategic nuclear forces.”


The Russians believe, therefore, that the Treaty is as much about reduction of U.S. missile defense systems as it is about strategic offensive arms reduction. A statement from the office of Russian president Medvedev made explicit the official Russian position on the treaty:

“Now, one aspect of our deterrent that we specifically did not limit in this treaty is missile defense. The agreement has no restrictions on our ability to develop and deploy our planned missile defense systems or long-range conventional strike weapons now or in the future.”

But this certainly was not the case for her counterpart Russian Foreign Minister Sergei Lavrov. He stated emphatically that,

“Russia would have the right to withdraw from the treaty if “the U.S.’s build-up of its missile defense strategic potential in numbers and quality begins to considerably affect the efficiency of Russian strategic nuclear forces.”


Some arms control groups believe that the perambulatory language is non-binding. But a general rule of treaty interpretation is that treaties shall be interpreted in accordance with their context, which shall comprise, among other things, the preamble to the treaty. Regardless, there is a clear disagreement between the U.S. and Russia regarding the terms of the Treaty.


Kim Colmes of Heritage also notes other U.S. constraints and Russian favoritism inherent in the terms of the Treaty. Colmes writes,

“The biggest problem with the new treaty is how lopsided it is in Russia’s favor. Because of financial constraints and outdated nuclear systems, Russias nuclear arsenal was already going down, especially its aging launchers and delivery systems. It would have likely been forced to make the reductions codified in this treaty whether or not the U.S. reduced its weapons. And yet if the treaty is ratified, we will have locked ourselves into reductions that cannot be changed. Were we ever to want to increase our nuclear arsenal — say, because China or some other country threatens us — doing so would put ourselves in violation of international law.”


“The new START also will give better protection to Russians than Americans. Once it is fully in force, we have to cut 151 of our delivery vehicles and launchers, while Russia could actually add 134 and still be under the limit of 700. The only side that’s disarming on this score, then, will be the U.S.”


To add insult to injury in this dreadful negotiation by the Obama administration, Ariel Cohen of the Heritage Foundation reports that the new START treaty actually facilitates the Russian trend to return to Multiple Independently Targetable Reentry Vehicle warheads (MIRVs) on intercontinental ballistic missile (ICBMs). To MIRV a missile is to place several nuclear warheads on a single ICBM. This helps Russia since its highly destabilizing RS-24 mobile, MIRVed missile will be the mainstay of Russian strategic forces by 2016.

Therefore, while the Obama Administration is moving the U.S. aggressively toward single warhead missiles, the new treaty has no limitations on the number of warheads that can be deployed on Russian missiles. As Russia develops a multi-warhead strategic missile arsenal the U.S. goes in the opposite direction-- an unstable nuclear posture emerges in favor of the Russians.

Two-thirds Senate consent is required for Treaty ratification and Senate ratification proceedings are expected to be taken up in November/December after the mid-term elections. However, Senators Jon Kyl (R-Ariz) and John McCain (R-Ariz) have deep concerns over the inherent Treaty language tilting an imbalance in favor of the Russians. GOP opposition is expected unless the Treaty’s language is changed to protect U.S. missile defense strategies and for the modernization of existing nuclear warheads permitted under the Treaty. Sen. John McCain has serious concerns over the Obama administrations Nuclear Posture Review that limits U.S. nuclear modernization.

Sen. McCain, ranking member of the Senate Armed Services Committee, summed up fearful America’s sentiments best on the Obama-led new START treaty in his opening statements on April 20,2010 at that committee’s hearing,


“In the coming months, we will have the opportunity to assess the treaty and confirm that nothing inhibits our ability to deploy defensive weapons to counter the missile threats of rogue states. Russia must not have veto power
over U.S. decisions on our missile defense architecture, and I will reject any attempts by this Administration, or any future Administration, to do so."


President Obama’s naïve eagerness for a world of kumbyaian nuclear disarmament apparently caught him singing with his eyes wide shut while negotiating new START. Because of his collectivist worldview blinders, Americans are at risk to pay a price for less nuclear defense protection.
Posted by Dennis Gallagher at 9:16 PM