THE CONSTITUTION IS NOT A SUICIDE PACT 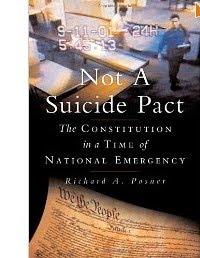 In his 2006 book "Not a Suicide Pact: The Constitution in a Time of National Emergency" Richard A. Posner, currently a judge on the Seventh Circuit Court of Appeals, addresses the preservation of strict constructionist rights and liberties inherent in the Constitution against the backdrop of the national emergencies stemming predominantly from the post-9/11 war on terrorism.

Judge Posner's book provides a perspective for arguing that such rights and liberties may need to be adjusted and/or provide exceptions to protect the public in dire national emergencies, such as war. His book will interest scholars, students and engaged citizens in the discourse of solutions and prevailing thought when rights and liberties collide with the powers of Congress and the President in times of national emergencies.

Judge Posner’s book systematically covers the spectrum of the salient issues affecting rights, liberties and the balance of national security in times of crisis. It addresses how constitutional rights are created and how national security shapes such rights affecting detention, interrogation, searches and seizures. It also discusses the issues surrounding whether free speech and the rhetoric of terrorism incites or advocates violence and he addresses the benefits, or lack thereof, of profiling. Rights to privacy are dissected, specifically with reference to the “library provision” of the USA Patriot Act and whether this provision will, according to civil libertarians concerns, impede thought and lead to a comprehensive picture of a subject’s political beliefs.

Judge Posner’s logic for the courts resolving issues of rights, liberties and national security is based on his “standard over rule” approach. Judicial interpretation by a rule is simple to apply but by making the outcome of a case depend on a few facts rather than all the circumstances the rule may be a poor fit for the circumstances. Standards allow the courts more latitude to defer to Congress or the President for their expert guidance in matters of national security. Eventually, as the nature of the terrorist threat and consequences for civil liberties become clearer, rules will eventually take shape from such standards.

Although his thesis will cause most civil libertarians to cringe, I agree with Judge Posner’s thesis that such rights need to be viewed in light of contemporary society and that the unique circumstances presented to American society by way of the war on terrorism calls for rights to be interpreted based on a risk-reward assessment of preserving public security. Judge Posner coins this proposal as the “law of necessity” wherein a moral and political, but not legal, justification for acting in contravention of the Constitution may trump constitutional rights in extreme situations. However, I also believe that such interpretations should be tempered with a watchful eye and regard for the fundamental principle of due process. With respect to the law of necessity, Judge Posner even notes in his book that

“… “due process” can be understood to require that any restriction on liberty be no greater than is necessary.”

Judge Posner illustrates his thesis through court cases, analogies and historical examples of cases of relaxed rights and liberties to contend with the competing interests of national security. He disagrees with the 1969 Brandenburg case wherein the Supreme Court ruled that speech advocating violence cannot be constitutionally suppressed unless it is directed to inciting or producing imminent lawless action. He argues that a future harm from terrorist rhetoric is no less a threat than one which is imminent in dealing with the contemporary war on terrorism. Alternatively, Posner agrees with Lincoln suspending habeas corpus during the Civil War without consulting Congress and defends this action as being morally justified because the Union was in peril.

The WikiLeaks case surfaced subsequent to Judge Posner’s book. However I imagine he would concur, as I would, that the WikiLeaks publisher should be punished under the Espionage Act of 1917 since he believes that, in the Pentagon Papers case, the Supreme Court should have enjoined the New York Times and the Washington Post from publishing said papers.

“When Posner is finished bending the Constitution to reach these results, however, one might justifiably ask what is left to preserve from breaking.”

Mr. Cole’s remark offers a nice transition into my conclusion on Judge Posner’s constitutional theories on national security. The greatest danger to curtailing civil liberties is by not taking the appropriate measures to reduce the probability of a terrorist attack and the USA Patriot Act most likely would never had passed if the 9/11 attacks had been thwarted. A minor curtailment of rights and liberties reduces the likelihood of a major curtailment of them in the future.
Posted by Dennis Gallagher at 7:47 AM