OBAMA AND THE 111th CONGRESSIONAL LEADERSHIP: THE GREAT AMERICAN EXPERIMENT 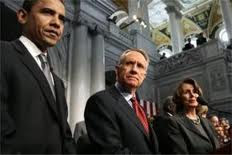 As we reflect on the 2009 and 2010 odyssey of President Obama and the 111th Congress leading America it was a journey that was preceded with ambivalent and some would say “hopeful” expectations. This leadership over the last two years was fraught with unconventional and radical styles, perspectives and hardened ideologies unseen since the FDR administrations. Given the anomalous leadership characteristics of these two branches of governance it presents the opportunity to review President Obama and the 111th Congress as a philosophical thought experiment deconstructed through its impact on American institutions of government.

The Obama administration and the leadership of the 111th Congress was, in effect, the great American experiment. It contained all the required elements of an experiment and, at a minimum, these two forces warrant a proof of experimental principle, which could be stated as, “What happens to America when an avowed progressive president and congressional leadership are in total control of its system of government?”

As with all studies our great American experiment requires a hypothesis. A hypothesis is not a theory, but a testable study of events or phenomena to determine patterns and it proposes an explanation for such phenomenon using predictions. Arguably the Obama administration and the 111th Congress' leadership were philosophically aligned and their consolidative strategies brought to bear a distinctive view of America and how its system of government should be managed. Our goal is to observationally measure the impact of these two ideologically aligned branches of government to determine their influence in reshaping, realigning and reinterpreting traditional political institutions.

A hypothesis is strengthened if it is tested over time and passes each iterative test. From an historical perspective there is precedent for this experimental evaluation. President Franklin D. Roosevelt’s progressive democratic policies sustained twelve years in the Executive branch with a progressive democratic party controlling the Legislative branch for his entire tenure as president. Throughout this symbiotic reign these two branches of government colluded to enact under the mantle of FDR’s “New Deal” a host of progressive polices, notably social security and welfare legislation, which cultivated an atmosphere of dependent constituencies and class warfare that indentured servitude for future generations. The partnering of progressivism between FDR and the Legislative branch uprooted fundamental founding father notions of American institutions of government. To quote the Honorable Janice Rogers Brown, who serves on the U.S. Court of Appeals for the District of Columbia Circuit,

“President Franklin Roosevelt’s New Deal marked a shift from the Founders’ negative conception of rights (rights as a shield from arbitrary government interference) to positive rights (government as a sword to ensure entitlements), a shift from limited to limitless government.”

Due to historical and current events this phenomenon lends itself to an experimental hypothesis stated as, “if there is intensified progressive leadership in America’s Executive and Legislative branches then the greater the infringement on American political institutions.”

Most sound experiments also comprise three variables- independent, dependent and controlled variables. The independent variable is the change agent variable. Therefore the “change” in our experiment is installing a progressive President and 111th Congress as leaders of American governance. We then must observe this independent variables ideological impact on the dependent variables, which are the benchmarks for change. Dependent variables would be changes under such leadership in adherence to various political institutions such as the Constitution’s principles of individual liberties, limited federal government and state’s rights, economic prosperity and solvency, employment, national defense and security and state sovereignty. The controlled variables are constant, such as the Constitution, the Declaration of Independence, America's free enterprise market system and military and defense systems. These are the bulwarks of America’s institutions of government.

We must now test our great American experiment’s hypothesis through an observational review of impact and associated patterns. What was the impact of the progressive Executive and Legislative branch’s independent variable on the various dependent variables? Did this ambitious progressive Executive and Legislative branch of government result in infringements on the Constitution’s principles and American’s rights, freedoms and economic and defense securities? What were the patterns that developed on these American institutions from this insistent progressive leadership? How did our system of government change, and to what degree, in terms of its adherence to the various principles of the Constitution and America’s economic and defense systems?

Their $2 trillion ObamaCare health legislation federal mandate forces Americans to purchase a good or service for the first time in American history. Challenged by 27 states, this legislation ignored the fundamental constitutional principle of limited federal government and state’s rights and has been struck down as unconstitutional by two federal district courts. On another state’s rights issue the Obama -111th led Congress has unilaterally challenged state sovereignty by opposing Arizona immigration legislation that mirrors federal immigration legislation, but has been unenforced by the Obama administration. The Obama-111th congressional leadership also collectively ignored the will of the people through their actions on these two issues.

From an observational perspective our great American experiment’s hypothesis has detected patterns of consistent results when introducing radical progressive leadership in the Executive and Legislative branches into America’s system of government. This experiment certainly merits further scholarly review. However the hypothesis results and the costs incurred to American values and principles certainly does not warrant more like-kind experimentation.
Posted by Dennis Gallagher at 8:09 AM