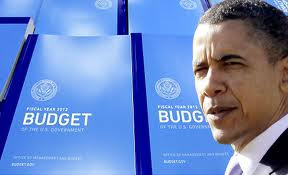 Whoever coined the phrase “talk is cheap” never met President Obama while he was crafting national budget projections. In his remarks about his 2012-2021 budget proposal he stated, “... I’m also convinced that the only way we can make these investments in our future is if our government starts living within its means, if we start taking responsibility for our deficits.”
Upon review of his incoherent budget proposal’s cost to Americans such rhetoric is priceless. Brian Riedl of the Heritage Foundation cites the “fuzzy math” in the President’s budget proposal that make it sound more like a snake oil solution for America’s fiscal crisis than a needed dose of penicillin.
However, as we deconstruct the President’s budget proposal even he cannot totally conceal all of its fiscal absurdities and inadequacies. In effect, every piece of his budget proposal bends the debt, spending and tax curves up. And for each year of the President’s ten-year budget proposal budget deficits reign year in and out. In the President's vernacular of "let me be clear" he has sent a clear message to all Americans, which is, "I'm passing the (literal and figurative) buck to all Americans when it comes to our national fiscal crisis".
Culpable for increasing the national debt (public and government debt) from $10 trillion at the beginning of his presidency to $14 trillion in as little as two years, Mr. Obama has put forth a 2012 tax and spend budget that nearly doubles the national debt to $26 trillion by the year 2021. To put the debt crisis into perspective, at a current U.S. population of approximately 310 million people growing at an estimated rate of 10% over the next ten years, the Obama debt/person cost in 2021 will be approximately $76,000/man, woman and child. This is the generational theft that President Obama has imposed on the future of Americans
Under President Obama’s 2011 budget the national debt is projected to be at 102% of GDP by September 2011 for the first time since World War II. Economists have warned that when the national debt is even at 90% of GDP it severely hinders economic growth. America’s economic output is now less than it’s debt. Mr. Obama’s 2012-2021 budget refuses to heed these economic warnings. His ten-year budget displays year in and out that the national debt will equal GDP and continue to choke off any opportunity for economic growth and job creation. As indicated in chart 1 his budget proposal for just the public portion of the national debt approaches 100% of GDP in an ever-increasing fashion.
Chart 1 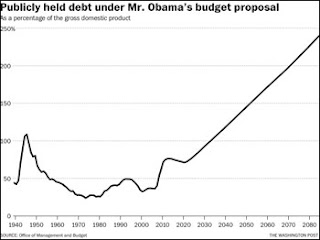 One of the many unrealistic aspects of Mr. Obama’s budget proposal contributing to this problem is his overly optimistic expectations for GDP growth when comparing this to a mounting national debt. He has projected unrealistic GDP growth by forecasting 2012 to have GDP increase by 3.6%, while 2013, 2014 and 2015 will see GDP increases of 4.4%, 4.3% and 3.8% respectively before a decline in growth rates to below 3% later in the decade. The President’s growth rates are all above those provided by the Congressional Budget Office and if not materialized will cause even higher debt to GDP ratios.
This prolonged crisis of national debts to GDP is a national security issue from the perspective that it not only retards any opportunity for private businesses to compete for borrowing and subsequent business growth and job creation, but puts America at the mercy of foreign lenders such as China, which currently owns $1 trillion of our national debt. These unsustainable debt levels raise grave concerns about the creditworthiness of our government, which, in turn, could lead to higher long-term interest rates that would aggravate the economic contraction.
In typical “tax and spend” progressive/socialist mode, the President's budget proposal is long on tax increases and short on spending cuts and, consequently, impinges job creation. He has proposed a litany of saddling tax increases on business and individuals totaling $1.5 trillion over the next ten years. As indicated in chart 2 these tax increases total 20% of GDP, when historically tax revenues are 18% of GDP. As stated by The Americans for Tax Reform, “that’s $1.5 trillion taken out of the economy and spent on government instead of being used to create jobs.”
Chart 2 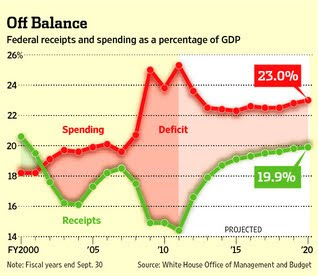 Another contributing factor to President Obama’s budgetary fiscal irresponsibility is illustrated in chart 3, which shows that his budget proposal increases spending by $2 trillion over the next ten years. According to Dan Mitchell of the Cato Institute this spending level is twice the rate of inflation between 2013 and 2021 and “…that's a mark of fiscal failure.”
Chart 3 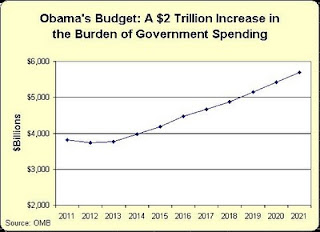 As a corollary to this is the mounting interest on the President’s ten-year increased spending spree. PolitiFact reports that over the ten-year period of his budget proposal the national debt grows and the interest on the spending and accumulated debt inherent in the President’s budget proposal is equivalent to each year’s deficit. Therefore there is no shrinking of the national debt. In fact, the longer it takes to pay down the debt, additional interest costs accrue, and the debt continues to grow.
The most egregious abdication of President Obama’s fiscal leadership lies in the question, “where are the entitlement cuts?”. The answer is simple; there are none. Entitlement fiscal management is the key to America’s fiscal crisis. As Jennifer Rubin reports in the Washington Post even David Brooks has admitted that Social security, Medicare and Medicaid comprise approximately 47% of the national budget and contributed the greatest to our national fiscal crisis. The President’s budget proposal has no mention of addressing this all important issue. His budget proposal reacts to entitlement management like a child hiding under the bed in fear of the boogeyman. No less than the Washington Post has criticized the President’s budget proposal as “punting” on the hard decisions surrounding entitlements. The Post states,

“Having been given the chance, the cover and the push by the fiscal commission he created to take bold steps to raise revenue and curb entitlement spending, President Obama, in his fiscal 2012 budget proposal, chose instead to duck. To duck, and to mask some of the ducking with the sort of budgetary gimmicks he once derided.”

For Presidents to identify and make the hard choices in the face of adversity and crisis is emblematic of leadership. To quote Peter Drucker, the godfather of management theory, “Management is doing things right; leadership is doing the right things.”
President Obama’s irresponsible ten-year budget proposal flies in the face of such a quality. It places the carnage of his fiscal carelessness to be laid at the threshold of future generations as a burden on their quality of life. It also abdicates and passes the buck to his opposing party to have the courage he lacks to right America’s fiscal ship.
Posted by Dennis Gallagher at 3:45 PM