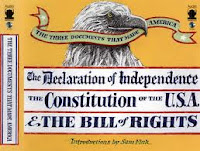 Michael Medved’s column “Do Obama’s Lousy Results Mean He’s Deliberately Destructive?” is a rejoinder to the contention by conservative commentators that President Obama’s policies are aimed to deliberately destroy the Republic. He debates this assertion on two levels, (1) all Presidents, however flawed, have occupied the office with the best intentions, and this is to include President Obama and (2) he questions the strategic benefits of conservative's attacks on the President’s motives arguing that public blowback from attacking the man, versus his policies, could hurt their candidate's 2012 presidential chances.

On the first point Mr. Medved compares President Obama’s policy failures in the historical light of past President’s missteps, poor judgments and character flaws. But he engages in wishful thinking and his evidence for President Obama’s allegiance to his oath of office is more sentiment-based than fact-based. Medved’s references to the shortcomings of past Presidents can be taxonomized as human errors and could be applied to any political or corporate leader who is viewed by the public as infallible, but at times throughout their leadership tenure display doubts or simple poor judgment that is commensurate with the human condition.

One can assert that each of the past Presidents Medved cites, notwithstanding their peccadilloes, had America’s best interests at heart, i.e., they liked and loved America. Their policies and decisions were crafted based on their personal vision to preserve at all costs America’s traditions that are the roots of American exceptionalism. An exceptionalism that sprung from an adherence to America’s founding documents which embodies its First Principles.

However personally flawed, the chief executives he references served America with a humble, heartfelt and conscience-driven interest to preserve America’s fundamentals and applied their policies with a delicate dedication to these Principles. If they believed their policies would be the tipping point to imbalance America away from such they course corrected or managed the circumstances by clearly communicating their motives.

Lincoln’s conscience-racked decisions during the Civil War, Reagan’s budget regrets, Clinton’s pivot to balance the budget after a massive and failed tax increase and G.W. Bush’s musings over the “Bush Doctrine” are but a few examples of such past presidential behavior. Even the most progressive of Presidents Woodrow Wilson challenged his own decision on creating the Federal Reserve.

Reaching back to James Madison, America’s fourth President, his arbitration on America’s first Constitution, the Articles of Confederation, was rooted in preserving these Principles. Before his ascent to the presidency, Madison’s “Vices of the Political System of the United States” written in April, 1787 outlined the defects of the Articles of Confederation laying the groundwork for America’s U.S. Constitution, the ultimate affirmation of America’s First Principles. In each of these examples each President endeavored to reconcile their policies by embracing America’s traditions, exceptionalism and First Principles.

President Obama has created a new category of presidential behavior. He is not speckled with moments of deceit or personal doubt. He does not question his actions in the light of America’s First Principles. His self-confidence, assurance and guile in his policymaking sets him apart from his predecessors. He has fully delivered on his campaign of transparency, since his unorthodox policies and systematic process for re-engineering America’s system of government has been all too clear.

But his transparency and confidence is his unfolding and has led many Americans to the very point Mr. Medved debates. It forces the president into a new category of behavior entitled “Skeptic-In-Chief”. Mr. Obama’s presidential presence seems to be that of a jut-jawed critic of American traditions that needs undoing, fixing and/or rectification. The president has labored to change America to serve his collectivist vision for all to witness and America’s First Principles be damned. Hardly a vision James Madison would condone.

Certainly Obama’s history with the likes of Bill Ayers, Rev. Jeremiah Wright, ACORN, SEIU, the Chicago New Party, the Democratic Socialists of America, admitted attendance at socialist conferences at New York’s Cooper Union and an avid disciple of Saul Alinsky shaped his attitudes on America. In addition, his parental influence on socialist/Marxist ideologies almost assuredly helped frame his cynical attitudes towards America’s system of government.  From these associations we can see the inspiration for his “hope and change” campaign mantra.

Secondarily, Mr. Medved’s counsel to the GOP’s 2010 presidential campaign is tricky, if not irresponsible, advice. How does a GOP candidate perform this bifurcation separating the President’s policies from his presidential character and why should the GOP hobble itself strategically with such a generous gift to his campaign? Should Mr. Medved expect such a strategy to be undertaken while likely GOP candidates Mitch Daniels, Tim Pawlenty, Mitt Romney or unlikely candidate Chris Christie face President Obama on the debate podium? Perhaps Mr. Medved should seek the highest office employing his own risky strategy to experience its results first-hand.

The President is a formidable opponent and Mr. Medved’s advice is precisely what he is hoping for from the GOP. Giving President Obama any quarter in the 2012 presidential campaign will only hearten his chances and lead to GOP regrets come November 7, 2012. Besides, we now have an educated electorate. They get it. The 2010 mid-terms have proven that a strategy tethering a candidate’s legislative character to their policies has proven to be successful. Campaigns are the occasions for incumbents to be called on the carpet; the President must be compelled to respond accordingly on all fronts.

Mr. Medved’s call for “benefit of the doubt” Obama sentiments and a über-civil GOP presidential campaign are laudable in light of the hue and cry for political civility, but the Obama camp may not have received the memo. Regardless, America cannot afford the luxury of Mr. Medved’s wishful thinking or another four years of a president who ignores America’s First Principles.
Posted by Dennis Gallagher at 5:15 PM