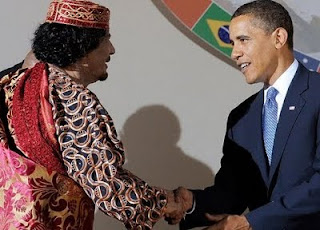 “Abdication, peppered with confusion and deceit, we can believe in”. This is the theme of the Obama administration and one that is wearing thin on the national and international stages. Whether it is inchoate health care legislation (now arbitrarily allowing over 1,000 waivers), neglecting to bring forth a national budget (balanced or otherwise) or failing to articulate a cohesive foreign policy doctrine, abdication, confusion and deceit are the guiding principles of this administration.

By passing off American military leadership in Libya to a NATO coalition of 28 countries the administration attempts to mask any semblance of a foreign policy by playing the role of multilateralist “citizen of the world. The only problem is America is NATO--financially and militarily. As Jonah Goldberg points out in National Review, “… we run NATO, so handing this off to NATO is like GE handing off a project to a European subsidiary and then claiming it’s not their project.” The American Thinker reports that the NATO secretary-general has stated that America’s share of NATO’s total defense spending is 75%. Regardless of the administration’s faux hand off to NATO America is on the hook for the financial and military costs for the heavy lifting in Libya.

With this in mind, President Obama’s first foray for deploying American forces overseas has him employing a double deceit at the expense of Americans by (1) covering up for a lack of a foreign policy doctrine that would elucidate an end game in Libya by passing off the leadership role to NATO and (2) through this cover up in effect he commits America to shoulder the lion's share of the financial and military burdens of the NATO coalition.

At the same time the Obama administration strives to deceive the American public with its shell game it attempts political cover for it’s ineptitude. The New York Times has reported that a senior administration has stated, “We didn’t want to get sucked into an operation with uncertainty at the end. In some ways, how it turns out is not on our shoulders.” If there a more eloquent representation of this administration's theme of abdication and deceit it escapes me.

Former Secretary of Defense Donald Rumsfeld aptly collated the administration’s mass of mixed messages as to Americas involvement in Libya in an interview with ABC News,

But there is no confusion as to who owns this war in Libya. By committing American forces into Libya under the guise of NATO it is formally classified as Obama’s war. He and he alone owns it. He owns its initiation, its execution and its outcome. This engagement commenced under President Obama's watch and his teflon-like knack to avoid, evade or abdicate responsibility for its resolution is not an option. And another convenient but illegitimate option taken away from the president’s arsenal of abdications is to "blame Bush" for its success or failure.

Posted by Dennis Gallagher at 1:59 PM

I am not sure this is OBAMA's WAR. It was the French who led us into Lybia. Obama supported Ghadafi until the French lead.

Obama agreed to the UN NATO-led coalition and NATO is led and financed by America. It defacto is Obama's war regardless of how much he attempts to escape that fact and he will accept the consequences of the result. Since when does the French ever lead into a military conflict, not to mention leading America anywhere? You make my point- Obama doesn't lead--he follows. But in this instance he cannot escape or abdicate his responsibilities. Nor can he traipse out his 'blame Bush' excuses for his failures if the rebels lose, Qaddafi remains in power or the 'new' Libya is a terrorist-run state.