WISCONSIN GOP: A LESSON IN COURAGE FOR THE NATIONAL GOP 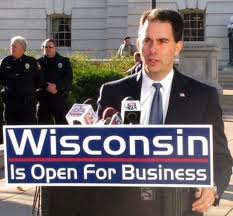 Gov. Walker was vilified as a Hitler. He and the Wisconsin GOP state legislature received death threats, even from their democratic colleagues. Protesters threatened private citizens with bomb scares and the Wisconsin GOP feared for their lives requiring police escorts as they came to and from the state capital.
Teachers, who conduct taxpayer-funded collective bargaining classes in the Wisconsin schools but claim to have their student’s best interest at heart, called in “sick” abdicating their responsibilities to their students, encouraging them to join in the protests instead of continuing their schoolwork. Even the full force and effect of the AFL-CIO and the Obama administration’s aptly named “Organizing for America” were bused in to unleash pressure on them.
Such criminal behavior emanated from one source; the Wisconsin public sector unions. The reason? Simply because the newly elected Wisconsin GOP was undertaking their responsibilities as directed by the Wisconsin citizenry to put their fiscal house in order by putting public union benefits on par, or slightly better than, non-union workers. And a daunting responsibility it is after years of deficit building union-democrat party cronyism that contributed to a two-year projected state deficit of $3.6 billion.
And what was the Wisconsin state senate democrats reaction throughout this ordeal? They were complicit with these attacks by avoiding perhaps the most important debate in the state’s history. They shirked their oath of office, their sworn responsibility to represent the citizens and failed to face up to their culpable cronyism. They fled the state like criminals in hiding, cowering in Illinois. Wholesale abdication is apparently the name of the game for unions and their democratic partners-in-crime when it comes to responsibility.
But the Wisconsin GOP stood steadfast in the face of this character and life threatening. They were resolute in their principled purpose to arrest the fiscal assaults by their unprincipled opponents. They displayed courage and integrity and faced down the archetypal bully’s tactics of fear and intimidation.
After three weeks to no avail of pleading the Wisconsin democratic senators to return to the state capital and perform their sworn duties the Wisconsin GOP prevailed. On March 11 the GOP passed legislation and the governor signed into law a bill that would require the state’s public sector unions to contribute slightly more to their health and pension benefits. The bill also addresses the major sticking point of this debate-- collective bargaining. It limits the state’s public sector union negotiations to wages up to the rate of inflation.
Fundamentally the bill aligns the state’s public sector union benefits with the norm of America’s workers. It frees Wisconsin local governments from the union’s fiscal shackles stemming from unsustainable and, frankly absurd, union dictates which have broken the backs of their budgets at the expense of taxpayers. The GOP measure allows local governments to now have the fiscal freedom to contend with needed state budget cuts, balance their budgets and, in the name of job preservation, avoids a layoff of 1,500 Wisconsin state workers.
The Heritage Foundation reports that studies show that state and local governments are severely underestimating their pension and benefit promises, including a $574 billion shortfall for the nation’s top major cities and a possible $3.4 trillion shortfall for the states. The Washington Post states: “Public employees often enjoy more generous pension and health-care benefits, and these are at the root of the long-term budget problems confronting many states.”
To address their state’s portion of these fiscal shortfalls Gov. Walker and the Wisconsin GOP signed into law a courageous measure that will allow lower taxes and bring industry and spur job growth for the state. This seminal legislation also protects the taxpayers from the legalized embezzlement schemes that the states public sector unions and the democrats have been conducting for years
But of course none of this good news is of any interest to the self-serving mentality of the state’s union workers. The union supporters responded to this measure with an, “how dare the GOP put us, taxpayer-funded employees, on par with America’s worker’s after we worked so hard to bilk the taxpayer’s by using their dollars to pay off the state democrats!” Now that Gov. Walker has exposed their larcenous activities the unions and the democrats are calling for his recall. But Wisconsin GOP guts are spreading and governors in Ohio, Indiana and New Jersey are now taking on the power of the unions.
The Wisconsin GOP was a collective Terry Malloy, the antihero in the classic movie On the Waterfront coincidentally based on the story of dockworker union thuggery and intimidation against those who challenged their illicit activities. After wrestling with his conscience Terry went public about the union’s criminal behavior. He was threatened, ostracized and brutally beaten by the union thugs, but in the end his conscience was clear and he showed the other dockworkers the way toward having the courage to face down the union bullies.
The new GOP leadership in the U.S. congress faces similar fiscal challenges at the national level as those faced by the Wisconsin GOP at the state level. They have been granted a gift by witnessing the Wisconsin GOP’s fervent leadership to serve their constituents nobly in the face of daunting political risks. Their Terry Malloy moment is at hand, and America waits to see if their profiles are a match for the Wisconsin GOP’s courage.
Posted by Dennis Gallagher at 8:20 AM