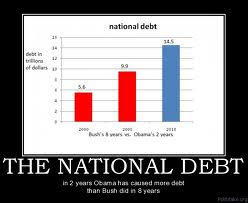 Fool me once shame on you, fool me twice…, well, I think we all know the punch line. Unfortunately the GOP was a punch line (or at least a reluctant accomplice) in their governmental budget shutdown negotiations with President Obama and the Sen. Harry Reid (D-NV) led Senate. In the spirit of transparency so was I when I touted GOP leadership in those negotiations through my article entitled “INDEPENDENT VOTERS LISTEN UP: GOP SHOWS STATESMANSHIP IN BUDGET SHUTDOWN SHOWDOWN".

My plaudits for the GOP were based on the understanding that the GOP had negotiated a $38 billion budget cut with Obama/Reid for 2011, not for the future. After all, elation was expected. Convincing the Obama/Reid spendthrifts to cut any budget funding, not to mention the $38 billion that was expected, qualified the GOP to be accorded the sanctity equivalence of Venerable in the political process. But after all the excitement around the GOP leading the democrat donkey to water and making it drink a $38 billion 7-Eleven “Big Gulp” the deal ended up asking them to sip a measly $353 million Dixie cup. Not nearly enough to quench American’s thirst for fresh-start budgetary reform.

Progressive-socialists, as represented by Obama/Reid, apply deceit throughout their political messaging, e.g., advocating no self-responsibility since a leviathan government can perfect one’s lives. The voters who reinstated GOP House leadership did so out of disdain for such deceit and are repelled by the appearance of GOP collusion in the 2011 shutdown negotiations with Obama and Reid. The GOP should be thankful, though, for a spirituality of forgiveness pervades the conservative soul. The GOP was in a tough spot. They were handed a fiscal disaster from a democrat-led congress and White House that abdicated their responsibility and they did their level best to keep the republic’s finances ongoing. Perhaps for that should be given some quarter for their ineffective efforts.

But inasmuch the conservative forgives they pride themselves on the principle of tradition as a prescription for a sound society. Therefore they do not forget. Fooled by shameful democrats and GOP complicity in the government shutdown negotiations, the American voters who placed the GOP in their positions of House leadership on November 2, 2010 will not be fooled again on the upcoming debt ceiling negotiations.

America’ debt under the Obama administration has skyrocketed to over $14.2 trillion and according to Treasury Secretary Timothy Geithner the nation will hit it’s statutory debt ceiling of $14.3 trillion on or around May of this year. If Congress doesn’t vote to increase the statutory limit according to Geithner “the Treasury would not be able to borrow money to meet the needs of the country, including “military salaries and retirement benefits, Social Security and Medicare payments, interest on the debt, unemployment benefits, and tax refunds.” Also Standard & Poors has downgraded U.S. debt to "Negative," arguing that America lacks a plan to adequately address the debt and that unless both parties can come together to agree on a plan, the U.S. could lose it's AAA credit rating within the next two years. 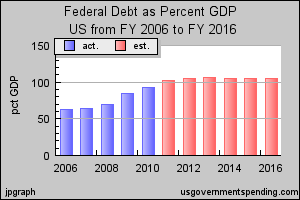 Raising the nation’s debt ceiling isn’t new. In fact it has been raised ten times in the past ten years, but the stakes are considerably higher now for the country. America is encumbered with a Chief Executive and a democratic party that is left-of-left progressive-socialist who hold a hardened belief in a strategic direction to convert America into a social democracy welfare state. If we view the above chart we can they have been successful towards that end. According to Stephen Dinan of the Washington Times under Mr. Obama’s budget projections 2011 will see the biggest one-year debt jump in history, or nearly $2 trillion, to reach $15.476 trillion by Sept. 30, the end of the fiscal year. That would be 102.6 percent of GDP (see above chart), the first time since World War II that dubious figure has been reached.

As the debt ceiling debate begins the White House and congressional democrats will traipse out their tired, old strategies of blame and budgetary class warfare. Karl Rove suggests it will be threefold:

(1) warn of catastrophic consequences if the debt ceiling isn't raised by early July.

(2) demand a "clean" debt ceiling increase, unencumbered by the tough spending and deficit caps that some congressional Republicans want to strap on the measure.

(3) blame the GOP for holding the economy hostage as often as possible.

But the GOP holds the cards in this moment of fiscal crisis and, if they don’t get duped again as was the case with the shutdown debate, they will manage to re-route America’s fiscal course toward prosperity and finally prove they are the party of fiscal concern. David Addington of The Heritage Foundation offers up to the GOP their own threefold strategy:

(1) cut current spending while emphasizing that Congress should make cuts in continuing programs because, given the budget practices of government that look to existing budgets as baselines for setting future budgets, the current cuts will result in related reductions in future spending.

(2) impose enforceable caps on the amount of federal spending in various categories, especially entitlement programs, and pass and send to the states for ratification a carefully crafted amendment to the Constitution that requires the government to balance the budget. The Balanced Budget Amendment, when ratified by three-fourths of the States, will restrain federal spending, but that ratification will take time and deep spending cuts must begin now and continue each year while the nation awaits ratification.

(3) overhaul the Congressional Budget Process by amending laws for permanent funding of programs, review how certain programs account for fee collections by requiring them to be deposited into the U.S. Treasury and reevaluate the costing process for funding proposals.

These are solid strategies that the GOP must embrace, promote and convict to if their campaign pledges to America are to hold water. Alexander Hamilton, America’s first Secretary of the Treasury, is quoted as saying, “A national debt, if it is not excessive, will be to us a national blessing”. What America has now is a national crisis and the GOP should not let it go to waste. I’m sure I heard that advice somewhere.
Posted by Dennis Gallagher at 5:42 AM