“Responsible- reckless”; “courageous- cowardly”; “prosperity-bankruptcy”; “self-sufficient- self-entitled”; “restore-confiscate”; “Friedman-Keynes”. Taking a page out of Carl Jung’s word association test of opposite responses, if the next word was “Ryan” what would be the logical response for Jung to diagnose an America with a healthy and fiscally responsible perspective? Certainly Jung would accept “Pelosi”, “Reid”, “Schumer” or simply “democrat”. But the likely response would be “Obama”.

The Jungian experiment resonates throughout House Budget Committee chairman Rep. Paul Ryan’s (R-WI) 2012 budget proposal, aptly entitled “The Path to Prosperity”, birthed from his previous budget template "Roadmap for America's Future". Ryan's "Path to Prosperity" is a responsible budget proposal by a courageous statesman that takes the lead to return America back to a land of prosperity.

Rep. Ryan's proposal creates an American environment of empowerment and self-sufficiency and a restoration to each American of their personal wealth and income. It condemns the self-evident fiscal failures of the Obama administration's partisan and fatally flawed Keynesian deficit-spending policies and resurrects the proven fiscal success of Milton Friedman’s free-market economic theories, which is the prescription for political freedom and America’s First Principles. 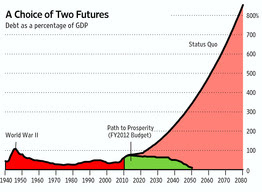 The tale of the two budget tapes is abundantly clear. House Budget Committee chairman Ryan's courageous, austere and responsible proposal versus the President's leaderless proposal that includes no meaningful fiscal reforms and appeals to a partisan progressive socialist base.

The cure for America's fiscal woes is a two-way street of budget and tax reforms and chairman Ryan's proposal is chock full of such proposals. Ryan’s 2012 budget proposal cuts federal spending by $6.2 trillion and reduces the budget deficit by $4.4 trillion over the next ten years in excess of the Obama proposal.

Ryan’s proposal also rolls back domestic discretionary spending to 2008 levels and freezes it for five years; the Obama proposal has no spending freezes whatsoever from this important baseline. In an effort to return America back on track towards prosperity the Ryan budget proposal reduces the public debt by an additional $4.7 trillion more than President Obama's.

And perhaps the most important indicator of all is that the debt-to-GDP ratio under the Ryan proposal in year 2021 is 67.5% compared to the Obama proposal of 87%.

The top individual top rate would likewise fall from 35% to 25%. Lowering tax rates to expand the tax base of revenues is the suggestion by the President's own National Commission on Fiscal Responsibility. The commission has seen the benefits of this tax strategy, known as the "Laffer curve", but Mr. Obama's budget proposal ignores his own commission's recommendations and wants to confiscate more income taxes by whopping $1.5 trillion over the next ten years!

Ryan’s proposal also reinstates constitutional First Principles by defunding and repealing ObamaCare, ends corporate bailouts, reforms Fannie Mae and Freddie Mac (the primary culprits in the home mortgage meltdowns) and brings government spending to below 20% of the economy, compared with the Obama budget proposal where spending never falls below 23% of GDP over the next decade.

The upshot of Ryan’s proposal is that it creates nearly one million new private-sector jobs in 2013, brings the unemployment rate down to 4% by 2015, and results in 2.5 million additional private-sector jobs in the last year of the decade. The only sector with any potential for jobs growth in the Obama proposal is the federal sector stemming from his continued spending and tax increases to support his vision of a bloated big federal government.

The austerity of Ryan’s budget proposal is matched by its elegance. It increases the tax base for corporations and individuals by lowering taxes. This translates into greater federal revenue opportunities, greater private-sector business expansion and consumer consumption, greater economic growth and additional private-sector jobs. At the same time it lowers income and wealth confiscation Ryan's proposal reduces the national debt as a percentage of the economy, puts the nation on a path to actually pay off the national debt and creates options and opportunities for businesses and individuals to render their own decisions in a free-market economy. The Ryan proposal smartly accomplishes all of these important goals to pave America's path back to prosperity and a regard for America's First Principles.

The response from the President on Rep. Ryan’s proposal was petulant demagoguery and divisiveness touting a class warfare political message that is beneath the office of the presidency. After inviting Rep. Ryan to a front row seat for his budget speech at George Washington University the President whined a message of fear and loathing in regards to Rep. Ryan’s courageous proposal.

The President inaccurately characterized Rep. Ryan's Medicare recommendations by saying, “It says, instead of guaranteed health care, you will get a voucher. And if that voucher isn't worth enough to buy the insurance that's available in the open marketplace, well, tough luck – you're on your own" and also said the Ryan proposal “would lead to a fundamentally different America than the one we've known – certainly in my lifetime.”

America can only dream that the lion's share of Rep. Ryan's budget proposal will be enacted to move America on a path as far away as possible from the America we have known under the Obama administration. The Wall Street Journal expressed the President's behavior quite well by reporting, “Did someone move the 2012 election to June 1? We ask because President Obama's extraordinary response to Paul Ryan's budget yesterday—with its blistering partisanship and multiple distortions—was the kind Presidents usually outsource to some junior lieutenant.”

It appears the President is not outsourcing any remarks that have to do with kicking America's fiscal crisis down his well paved road of reckless spending.
Posted by Dennis Gallagher at 11:33 PM