IS NEWT THE COMPREHENSIVE CANDIDATE? 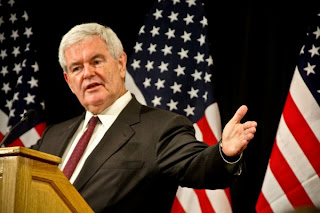 There is no dearth in the concerto of GOP presidential candidates. At last count there are twelve: Romney, Pawlenty, Paul, Santorum, Cain, Johnson, Huckabee is out, Gingrich is in, and the count assumes Trump, Bachmann, Huntsman, Daniels and Palin will throw their hats in the ring. But the universe will most certainly expand and contract for some time before the nomination is locked.

To distinguish their platforms from President Obama’s record the GOP candidates have been campaigning in symphonic fashion. They harmoniously tout their philosophy to “take America back”, “restore American values and hegemony” and “respect constitutional principles”. In concert they trumpet their policy platforms for “re-energizing the economy”, “reducing unemployment” and “restoring American sovereignty”. And they simultaneously sound the bugle for being “tough on terrorism” and “protecting American interests abroad”.

What are the conservative base and, most importantly, the all important independent voters to make of these performances and is President Obama’s campaign team at all concerned with the GOP campaign rhetoric? Bottom line, how will the GOP’s messaging play out in the long run and what will be its impact on Obama’s strategy for reelection? It’s much too early to determine these answers since the campaign season is still in exhibition mode, but continuing the GOP’s one-note harp and carp oratory will be a recipe for disaster come November 6, 2012. The GOP’s strategy to continue in compare and contrast mode with Obama’s record is fatuous at best.

Unlike his run for office, President Obama now carries the largest valise in national politics, i.e., a presidential record. His policies, perspectives and philosophy of America are for all to see and Americans get it, at least somewhat. They get that the Obama policies appear to be designed to convert America to a über secular social democracy welfare state to run with a herd of international mediocrity, but they don’t understand why. They get the Obama message to the world that America is no better and at times has been worse than other nations, but they don’t understand his bitterness toward America. And they get that the President’s polices rub against the grain of every proven ideal that invigorates America, but they don’t quite grasp why he continues them in the face of obvious failure. Even the President’s base is reticent to endorse him fully given his inconsistent signals-- attacking the wealthy while extending the Bush tax cuts, condemning Bush-era enhanced interrogation techniques but using the same to kill bin Laden and continuing with the Bush interventionist policies into Libya.

But assaulting the President per policy is only the backstory for the GOP nominee, not the primary narrative. President Obama is a masterful magician at political smoke and mirrors and to challenge him piece-by-policy piece will only leave the American electorate dazed and confused, risking a third party candidate undermining a potential GOP victory.

To destabilize the Obama campaign the successful GOP candidate must not get mired in intense policy debates on America’s First Principles or risk Obama’s bully pulpit of conservative canards. They must steer clear of exhaustive “this or that is constitutional” arguments lest play into Obama’s hand of sophist, Alinsky-like rebukes which is his shining wheelhouse. They must not resort to a plea for a return to America’s heritage of strong frontiersman-like individuality or fall into Obama’s deadfall of class warfare sympathies.

This is not to say these classic conservative arguments should not be extolled by the GOP, but their packaging needs a refresh and their promise needs an edge. The GOP nominee must center these American legacies around an overarching theme of opportunity for all Americans. What is the Obama Achilles heel? It is his inability to lead, to galvanize and to elucidate a clear vision of America that serves all Americans, not factions. In a word the President lacks comprehension. The GOP candidate must be someone who will present a comprehensive, all-purpose plan of opportunity that will appeal to Americans at all levels.

At first glance one GOP presidential candidate appears to have the capability to provide such comprehensiveness. Newt Gingrich, the former Speaker of the House during the Clinton administration, seems to have the goods to package American idealism into a message that speaks to all Americans. To diffuse the baggage, Gingrich has been married three times and committed adultery in his prior two marriages. But his mea culpas on this issue are of record and this issue is between the former Speaker’s God and the voters. But it is interesting that Mr. Gingrich converted to Catholicism in 2009, which is no mean feat, and one can draw their own conclusions as to his reasons for this very personal decision.

What is of national concern though is a GOP presidential candidate that is capable of clearly communicating a vision for America that resounds universally and the former Speaker’s track record appears to support this requirement. As the first GOP Speaker of the House in forty years from 1995-1999 Gingrich forged solutions for the tough problems facing America, and did so in the midst of the Clinton democratic presidency that was not wholly supportive of the former Speaker’s ideas. This is proof that Gingrich has the needed presidential talent for compromise without sacrificing his convictions.

Gingrich’s “Contract with America” was his seminal example of a comprehensive plan to address America’s tough problems and provide solutions for all American’s, regardless of their political demographics. Through his “Contract with America” he addressed a number of issues requiring immediate reform as to congressional operations and had a comprehensive ten-step plan that would put America on track for all to benefit, most notably budget and entitlement reform. As a consequence the national budget was balanced in his last two years as Speaker and sweeping welfare reform legislation was enacted. Gingrich’s welfare reform legislation significantly reduced welfare caseloads and employment and household incomes of single mothers rose. According to the FRBSF Economic Letter, “importantly, these improved outcomes largely survived the challenges posed by the 2001 recession, suggesting that the initial successes were not simply due to a booming economy.”

Christopher Malagisi points out in the Washington Examiner a number of traits that establishes Gingrich as a President who would animate the country as a whole toward opportunity and success. Malagisi writes,

"When America is in need of clarity of purpose and confident and experienced leadership, Newt has spent the better part of a decade thoughtfully prescribing solutions for America’s ills..."

Gingrich's appeal is not unanimous within the ranks of Americans hungry for a President that has a clear direction for the country to return to its path of universal opportunity. Only time will tell as who emerges as the GOP frontrunner, but caution to the candidate who allows Obama to take the fight to them. The candidate with the comprehensive strategy for all Americans will truly distinguish themselves from the Obama era of confusion. At this point in the deliberations it appears at least that Newt Gingrich has the experience and the knowhow to manage that daunting task.
Posted by Dennis Gallagher at 12:46 PM