THE TRIUMPH OF AMERICA’S THIRD ESTATE 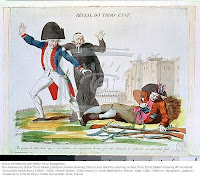 Abbé Sieyès, the 18th century French clergyman, authored the pamphlet “What Is the Third Estate?" which was a proclamation to ennoble the power of France’s general populace, known in the parlance of the Middle Ages and early modern Europe as the third estate; the first estate being the French clergy and the second estate the nobility. Each estate of the realm represented the major factional influences in the country and their hierarchy represented their proximity to God. Sieyès pamphlet proclaimed that France’s third estate was the only estate by saying, “the third estate, then, comprises everything appertaining to the nation; and whatever is not the third estate may not be regarded as being of the nation. What is the third estate? Everything!”

Sieyès’ little pamphlet was a catalyst for the French revolution. It also inspired countless socialist arguments for the benefits of an ideologically abstract democracy that leads to “mob rule”, “rule of the crowd” and a sort of totalist democracy that is a tyranny of the majority, and such was the result of the French revolution. Fortunately this is not the structure of America’s representative democracy and, as Russell Kirk states, “it bears much resemblance to America's political and social pattern as the oar of the boat does to the ore of the mine.”

Unlike 18th century Europe America’s brilliant system of government, grounded in equal rights and individual opportunity, does not permit a group of societal elitists to delineate a social order of human value and contiguity to God. But America has parallels to middle age European social orders with its own version of the three estates, which are byproducts of its political social structure.

America’s constitution is purposely silent as to its Judeo-Christian heritage to avoid any hint of a state imposed religiosity and therefore invalidates American clergy from the first estate. Dubiously, I submit America’s elected representatives and officials through their governmental leadership and legislative efforts as equivalent to the clergy’s role as moral arbiters of the first estate.

America’s counterpart to second estate nobility would be its “insiders”. This American social order has its peer with nobility in that it holds the wealth and wherewithal to advance their agendas by influencing the first estate’s election outcomes and legislative efforts. America’s second estate comprises the special-interest faction of America and includes groups such as lobbyists for Wall Street investment houses, financial institutions and multi-national corporations, all public/private unions, community action groups, and other fully funded and well-organized special interest factions.

The moniker for France’s third estate was pejoratively named the “commoner” and encompassed the large majority of it’s population. This social order represented two separate sub-groups: urban and rural. Non-noble merchants, physicians, lawyers, government workers and other offshoots of the middle class represented the urbanites, or bourgeoisie. The rural sub-group predominantly included the farming class and both groups included the peasantry and the serfs. America’s comparable third estate also encompasses the majority of Americans and is comprised of the small to medium-size business owner, the middle class employee, the struggling lower working class strata who are juggling multiple jobs to maintain a minimalist lifestyle and the unemployed facing uncertain economic futures.

It’s helpful to reflect on the balance of power of each estate in the context of two recent political events, namely the Wisconsin GOP-public union controversy and the national debt ceiling debate. The circumstances surrounding these two issues caused America to reach a seminal crossroad leading to two well-traveled paths. One is America’s original pristine highway beautifully paved by our founding father’s principles of a Republic to represent the balanced interests of the populace. The other path is, regrettably, a familiar eye sore. It is a marred side road dug out by tyrannical, central planning socialists masquerading as "democrats" who have infiltrated America with a goal to convert it to a collectivist state through special interest intimidation and mob rule tactics.

In the case of Wisconsin the first estate, controlled by the GOP, were staring down the figurative gun-barrel of the self-serving, embezzling and exploitive demands of the second estate’s public sector unions. The choice was between averting the progression of, as de Tocqueville warned, a despotic democracy or continuing to fall prey to the rule of the union mob. The omnipresent intimidation tactics employed by the Wisconsin public sector unions recalls James Madison’s Federalist Paper No. 10 wherein he aptly described the union menace by writing, “By a faction, I mean a group of citizens, either a majority or minority, united and actuated by some common passion or interest adverse to the rights of other citizens or to the aggregate interests of the community.”

The national debt debate brought to mind what John Adams said, “There are two ways to conquer and enslave a nation. One is by the sword. The other is by debt”. This congressional “conversation” was a clash of visions within America’s first estate. The GOP vision was driven by an insistence on spending parameters aligned to the constitutional canons of limited debt and limited government. The democratic vision was powered by a desire to continue America’s drift toward a social democracy collectivist welfare state. To accomplish that the socialists (democrats) wished to continue unchecked, uncontrolled and unconscionable national spending sprees manifested through ideologically driven discriminatory confiscatory taxation and wealth redistribution methods.

At the center of these morality plays stood the future of America’s third estate, but they were not benign spectators. America’s third estate played an active and critical role in the outcomes of these seminal issues, and took command of their future through their collective voice at the 2010 voting booths. Their message to the Wisconsin GOP and the national Congress was a demand that America’s business will not be a continuation of special interest influence over congressional legislation. The third estate reminded the first estate and shocked the second estate into the reality of America’s purpose, which is that of a Republic appositely described by Lincoln as “of the people, by the people, for the people.”

History just doesn't support this thesis. The USA was doing well until that Republican president of the early 1980s decided to massively increase military spending and government borrowing to fund it. Percentagewise, he increased the national debt by more than anything that had ever came before. Since then, every Republican commander-in-chief has followed suit. And labor having representation was never about cutting into the rights of the business owner; but instead is a reaction to the proclivity of human beings to be greedy. Working conditions and starvation wages caused that. Republican government's anti-union policies resemble what you claim to abhor. Democrats have not been angling to achieve a "social democracy collectivist welfare state". Some things work better as a cooperative effort, certainly. How about military funding? Is that democratic collectivism, or no? Are we perhaps funding that collective so generously because politicians are being pushed (by corporate PACs) to increase spending as a form of welfare for the military industrial complex? How do you like the modern policing agencies from the state level down? As a society we allow them to rob citizens (see asset forfeiture and seizure law) because we have decided to short-fund police departments. That's the price of failing to fund what should be cooperative effort (collectivist welfare) with selected solutions meeting the needs of civilization. This "social democratic collectivist welfare state" is part of civilization and improves life for most of us and we should fund, honestly and without ulterior motive, regardless of crying from the one percent because they can't have slave labor and are expected to help fund the needs of society. Some golden cows are just too expensive.