FAST AND FURIOUS, SOLYNDRA AND ALL THAT JAZZ 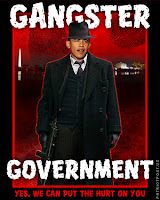 “I am in this race to tell the corporate lobbyists that their days of setting the agenda in Washington are over. I have done more than any other candidate in this race to take on lobbyists — and won. They have not funded my campaign, they will not run my White House, and they will not drown out the voices of the American people when I am president."
Presidential candidate Barack Obama, Des Moines, IA, November 10, 2007

Be wary of holier than thou campaign decrees. As the left’s messiah was paying tribute to himself in Iowa, George Kaiser, key Obama political bundler and investor in Solyndra, was most likely collecting his thoughts on how to wrangle some payola from his candidate, if elected. To wit paybacks are a bitch, especially for the American taxpayer.

The Obama regime has been busy lately triaging a number “what did you know and when did you know it” scandals, which are a hodgepodge of incompetence, cronyism and partisan bullying. The conventional wisdom is how they appear to be very Watergate-like. But the aroma of these scandals reeks more of “plead the fifth” Chicago- style gangsterism, the President's hometown, than the inside the beltway cloak and dagger trappings of Watergate.

Number one on the hit list resulted in the tragic death of an American border agent. “Fast and Furious" was an ATF gunrunning operation where 2,000 weapons were sold to small-time gun buyers in the hopes of tracing them to Mexican drug lords trafficking in weapons along the southwestern border and into Mexico. This botched sting operation has been connected to at least 11 violent crimes in the United States, including the killing of border patrol agent Brian Terry in Arizona with one of the ATF Fast and Furious weapons, and approximately 200 violent crimes in Mexico.

Rep. Darrell Issa (R-CA) chairman of the House Committee on Oversight and Government Reform, is busy investigating Fast and Furious and the Solyndra scandals. Rep. Issa also sits on the House Judiciary Committee and AG Eric Holder, America’s “crack” chief law enforcement officer, testified to that committee on May 3 claiming “sin conocimiento” in the whole Fast and Furious mess up until just a few weeks before the hearing.

But evidence surfaced that Holder was in cover up mode and he knew of Fast and Furious as of July 2010. In fact he had a conversation on the operation with Sen. Charles Grassley (R-IA) in the Senator’s office in January, 2011 and also told Sen. Kay Bailey Hutchison (R-TX) on March 10, 2011 that he had learned of concerns about the program. So obviously Mr. Holder lied under oath to Congress as to his knowledge of this fiasco. In the wake of Mr. Holder’s congressional canards he threw under the bus and fired a number of ATF and U.S. attorney officials.

The looming question is why was this feckless operation initiated in the first place. Be careful if you’re planning on posing this question to an Obama spokesperson lest you have your head handed to you, just ask CBS reporter Sharyl Attkisson. ATF Special Agent Peter Forcelli testified to Rep. Issa’s committee’s that the entire operation was a grand waste by saying, “The thought that the techniques used in the “Fast and Furious” investigation would result in “taking down a cartel” given the toothless nature of the “straw purchasing law” and the lack of a strong “firearms trafficking statute” is, in my opinion, delusional.”

Was Fast and Furious simply more incompetence emanating from the Obama regime, a la its economic policies, or was there something more insidious at play? Some claim that Fast and Furious was an elaborate attempt to further the Obama regime’s efforts to satisfy second amendment restrictions for its special interest lobbyists. Rep. Issa (R-CA) and Sen. Grassley (R-IA) have even posited that the Obama administration actually initiated the program as an advance attempt at furthering gun control in the U.S. In fact, ATF and Explosives agent, John Dodson told Rep. Issa’s House Oversight Committee that David Voth, supervisor of Fast and Furious was “jovial, if not, not giddy but just delighted about" marked guns showing up at crime scenes in Mexico.”

Rep. Issa’s committee has subpoenaed communications from top Justice dept. officials. But regardless of the committee’s findings as to whether Fast and Furious was due to ineptness or treachery,  AG Holder's self-serving cover up  adds a disrespectful insult to the tragic deaths of agent Brian Terry and others.

From Fast and Furious’ sinister cover-up we turn to Solyndra’s crony capitalism. Solyndra is the poster child for Obama’s socialist utopia, where “omnipotent and brilliant” central planners such as he select society’s winners and losers at the taxpayers expense; you’re definitely a winner if you contributed heavily to the central planner’s campaign. It’s sordid details include George Kaiser, key Solyndra investor with a 35.7% stock ownership through his Foundations, billionaire oilman, a major Obama donor and frequent guest at the White House who openly indicated that the President was fast and loose with the taxpayer’s dollars saying, “There’s never been more money shoved out of the government’s door in world history, and probably never will be again, than in the last few months and in the next 18 months.” Kaiser’s Solyndra received $535 million loan federal guarantee and that’s a lot of shoving.

Solyndra was a solar panel manufacturing company that received its $535 million federal loan guarantee via Obama's failed Stimulus package. The President has a green jobs spending “slush” fund of approximately $30 billion which was rolled into the Stimulus plan which is devoted to playing Russian roulette with taxpayer’s money. The Solyndra plant cost $733 million, $535 million funded by taxpayers, and was replete with robots that whistled Disney tunes, spa-like showers with liquid-crystal displays of the water temperature, and glass-walled conference rooms. “The new building is like the Taj Mahal” said John Pierce who worked as a facilities manager at Solyndra. It’s comforting to know the Solyndra folks were enjoying state of the art comfort at taxpayer’s expense.

In April 2010 President Obama touted Solyndra as “leading the way toward a brighter and more prosperous future”. But according to financial reports Solyndra didn’t have much of a future itself. A month before the President’s laudatory comments the accounting firm PricewaterhouseCoopers issued a warning about Solyndra’s going concern status by stating the company wasn't making money, never had, and this raised "substantial doubt about its ability to continue as a going concern."

Solyndra violated it’s government loan terms in December 2010 and admitted to the Obama regime it was running out of money. But the Obama regime continued to fund it despite it’s projected bankruptcy, continuing the process of throwing precious taxpayer money after a bad investment, and Solyndra subsequently filed for bankruptcy in September 2011. Solyndra isn’t the only failed green energy company to be selected by the Obama regime's scratch card venture capital lottery. It's one of 42 other projects in the Energy department’s taxpayer funded governmental venture capitalist lottery totaling $30 billion. At least four other “Solyndras” have received stimulus funding only to later file for bankruptcy.

So the Solyndra story ends with taxpayer’s losing $535 million in some bankrupt green company orchestrated by the Obama regime’s desire to play loan shark to one of his crony capitalist donors. But not to worry because there is a happy ending for the Obama cronies. Mr. Kaiser, the President’s favorite bundler, is fine since his Solyndra investment has preferential treatment in the bankruptcy proceedings, and the Solyndra executives have invoked the Fifth Amendment refusing to testify before Congress. So the old payola is alive and well in the Obama regime and his cronies, who in Chicago gangland fashion “copped the fifth”, would make Al Capone proud.

Fast and Furious and Solyndra-- the equivalent of Chicago’s Capone era St. Valentines’ Day massacre and gangster graft. The song lyrics to “My Kind Of Town”, the famous homage to President Obama's hometown,  say Chicago “has all that jazz”. It appears that the President has taken some of that jazz to the White House.