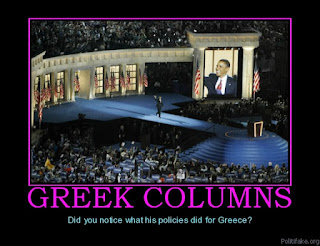 If we recall those cheesy Greek columns that were the backdrop for the DNC convention at Denver’s Invesco Field stadium in August 2008 we may have initially thought those pillars to simply represent the DNC's pitiful hero worship of some mysterious unknown small time Chicago politico named Barack Hussein Obama as their party’s candidate for President of the United States. Little did anyone realize that this garish Greek metaphor was a foreshadowing of the grand plan for the progressive/socialist’s “Apollo” to deliberately destroy America’s economic hegemony and replace it to resemble Greece’s financial decay.
President Obama’s Greek recipe for America’s financial demise is undeniably laden with poisonous ingredients (deficit spending, mounting debt, and class warfare tax threats), but at least the manner in which he “stirs the sauce” has one saving grace; it’s predictable. During his tenure as President his 2010, 2011 and 2012 fiscal year budgets had a consistent theme to dismantle America’s economic fabric. Those three budgets were systematic plans to spend in excess of revenues and balloon America’s national debt instead of fostering economic growth.
Now, in the face of a national debt crisis wherein the national debt exceeds GDP and a downgrading of America’s global credit rating, President Obama continues that theme with his 2013 fiscal year budget. In baseball vernacular he’s four-for-four. To support this notion The Wall Street Journal deftly summarized President Obama’s annual budget proposals from 2010-2013 that illustrate his uncanny resolve year in and year out to bankrupt America:
Also according to the WSJ all of the above has added an astonishing $5 trillion in debt during President Obama’s first presidential term. National debt held by the public will approximate 74.2% in 2012 and keep rising to 77.4% next year (see below chart 1). Economists believe that when debt to GDP reaches 90% the economic damage begins to risk--think Greece.


Holistically the Obama 2013 budget is fundamentally just a cut and paste from his previous three spending spree budgets freshened up with some new and improved class warfare tax hikes and updated with his perennial smoke and mirror accounting and spending gimmicks. A topside review of President Obama’s latest schematic for bankrupting America comes courtesy of the U.S. Senate Republican Policy Committee, with the committee’s overarching comment that “President Obama’s fiscal year 2013 budget increases spending every year, proposes the largest tax increase in history, burdens the country with more debt, and never balances the budget”. The following are the RPC’s highlights:
Spending, Spending and more Spending
Deficits, Deficits and more Deficits
Debt, Debt and more Debt
Class Warfare Taxes, Taxes and more Taxes
Additionally any of the President’s future deficit reductions are basically accounting shell games. They are Budget Control Act cuts already in place and $848 billion in discredited phantom “savings” from the wind-down of operations in Iraq and Afghanistan. So, in a word, President Obama’s fiscal year 2013 budget has no actual deficit reduction measures.
When it comes to managing the greatest threat to America’s economic system, and the cause for Greece’s economic downfall, Medicare, Medicaid and Social Security entitlements, President Obama has again kicked the can down the road. According to the Heritage Foundation “by the middle of this century, these three programs and ObamaCare will consume about 18 percent of GDP, soaking up all the historical average of federal tax revenue”.
Critics of the Obama budget are not limited to the RPC or conservative think tanks. Dana Milbank, hardly a card-carrying conservative, reviewed the President’s 2013 fiscal year budget and made the following rebuke,


“The White House’s budget for fiscal 2013 begins with a broken promise, adds some phony policy assumptions, throws in a few rosy forecasts and omits all kinds of painful decisions. Even then, the proposal would add $1 trillion more to the national debt than Obama contemplated a few months ago — and it is a non-starter on Capitol Hill, where even Senate Democrats have no plans to take it up.”

Another Obama budget, another blueprint for bankrupting America and another display of cowardice and inability on the part of President Obama to display any semblance of leadership to present a serious plan for reinstating America’s solvency. Predictable? Yes. As will be the American version of a Greek tragedy unless true leadership is installed in America’s Oval office.
Posted by Dennis Gallagher at 7:00 PM