DUCK DYNASTY AND THE NEW FASCISM IN AMERICA 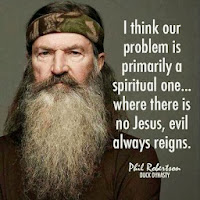 
The network A&E issued a statement late Wednesday branding Duck Dynasty star Phil Robertson’s recent statements to GQ about sin and homosexuality unacceptable and indicated that his beliefs “in no way reflect those of A&E Networks, who [sic] have always been strong supporters and champions of the LGBT community.” The network has placed Phil under indefinite hiatus.

Expressing a Biblical viewpoint is now “unacceptable?” In any forum? Really? How far and how fast we have fallen as a society and as a culture. Freedom of speech and freedom of religion (especially the Christian one) is now not tolerated in the eyes of those who have completely capitulated to the charms of the gay agenda and those who seek to complete the mainstreaming of homosexuality into society without debate or criticism.


It is amazing that one can now be hounded, punished, and censored for merely having the audacity of believing in traditional morals and values. And for daring to express them. Political correctness is a tool of tyranny wielded by the radical 'isms' of the Left with increasing ferocity. The persecution of Christians continues to expand and grow every day and those who dare to proclaim a Biblical principle can expect no mercy. The Left has absolutely no tolerance for any beliefs other than their own. All else is branded incendiary bigotry, intolerance, and hatred. It has become fashionable to persecute traditional values, but if you dare offend gays, lesbians, or Muslims for that matter, you’re going to be intimidated, silenced, and labeled as a hater.


The followers of the new religious creed of ‘tolerance, multiculturalism, diversity, and political correctness’ are among the most intolerant of people. No one is allowed to disagree with them in a public forum or manner without being blasted, mocked, and shut down with extreme prejudice. All the power available to our fascist friends of the Left is brought to bear against those so foolish as to dare to utter a word contrary to their official creed.

Robertson discusses in his GQ interview his religious beliefs and about sin, saying, “start with homosexual behavior and just morph out from there. Bestiality, sleeping around with this woman and that woman and that woman and those men.” Then, he paraphrases Corinthians saying, “don’t be deceived. Neither the adulterers, the idolaters, the male prostitutes, the homosexual offenders, the greedy, the drunkards, the slanderers, the swindlers — they won’t inherit the kingdom of God. Don’t deceive yourself. It’s not right.”

Robertson added in the interview,


“It seems like, to me, a vagina — as a man — would be more desirable than a man’s anus. That’s just me. I’m just thinking: There’s more there! She’s got more to offer. I mean, come on, dudes! You know what I’m saying? But hey, sin: It’s not logical, my man. It’s just not logical.”

Robertson further elaborated on the interview in question later saying,

“I myself am a product of the ’60s; I centered my life around sex, drugs and rock and roll until I hit rock bottom and accepted Jesus as my Savior. My mission today is to go forth and tell people about why I follow Christ and also what the Bible teaches, and part of that teaching is that women and men are meant to be together,” the statement said.

“However, I would never treat anyone with disrespect just because they are different from me. We are all created by the Almighty and like Him, I love all of humanity. We would all be better off if we loved God and loved each other.”

Merely stating what the Bible says about certain topics is not offensive. It is instead a statement of Biblical truth.

Interestingly enough the gay rights group GLAAD said in a statement posted on the group’s website, “Phil and his family claim to be Christian, but Phil’s lies about an entire community fly in the face of what true Christians believe.” Apparently, “true Christians” don’t believe in the Bible. Now that’s a twisted bit of theology to say the least. But in the eyes of Left and the gay community ‘up is down, and wrong is right.’  What a confusing state of affairs to say the least.

I’m sure the apostle Paul would have been extremely surprised to find out that he was not a “true Christian” (read Romans 1:26, 27).  As the son, grandson, and great-grandson of ministers of the gospel I have to say that Phil Robertson’s statements were closer to true Christianity than those issued by GLAAD. You are free to disagree with the Christian religion and what its founders taught, but don’t try to pretend it is something that it isn’t.

It is also interesting that the same groups of people who supposedly oppose the bullying of people for their personal beliefs are now bullying someone for their personal beliefs. If you can tolerate someone saying, “I’m gay and I’m proud” then you certainly should be able to tolerate someone saying, “I’m Christian and I’m proud.” In the end, Darkness cannot stand the light of truth. Therefore, there can be no tolerance for truth. It must be silenced no matter what. The champions of diversity stop at diversity of thought and in reality become mere thought-police using the levers of power to create a chilling effect on all those who don’t agree with their agenda.

My prayers and heartfelt support for Phil Robertson, as well as anyone else who has suffered at the hands of the new American fascism of the Left.
If you would like to share your views on this particular topic with the A&E network, their contact information is below.

David Huntwork is a conservative activist, blogger, and columnist and the proud father of three daughters. The son, grandson, and great-grandson of Ministers of the Gospel he brings a unique blended background of theology and ideology to the great debates of the day. He believes that Faith, Family, and Freedom is the formula for success and the key to a good life and a healthy nation. David blogs at Constitutionclub.org. You can contact him at Davehuntwork@juno.com.
Posted by Dennis Gallagher at 9:44 PM