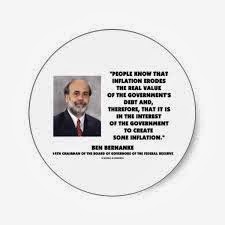 The following is an editorial by James Hall


With Ben Bernanke's departure as Chairman of the  Federal Reserve the critiques of his tenure begin. The mainstream financial press is giving mostly favorable accounts. Heretofore, such praiseworthy acclamations strike a sharp contrast with the actual record of the state of the economy. However, the admirers of the Fed and his specific enactments live in a time warp that only "masters of the universe" encounter. For the remaining population, an intense struggle for survival is the actual experience, remembered from the Bernanke years.
Investopedia expresses a complimentary score of The Legacy Of Ben Bernanke, and cites distinguished highlights and concludes that, "Under Bernanke’s stewardship, the Fed became the most transparent it has ever been in its history."
Yet, they are compelled to mention that from 2008 onward, Bernanke and the Fed embarked on a series of unparalleled – and often unconventional – rescue programs and stimulus measures. These included:


Ben Bernanke's Great Inflation Cover-up is an assessment that one would expect from the Mother Jones publication.

Then there is the valid point made by Bill Sardi in LewRockwell.com. "The Fed been printing new money at the rate of $85 billion a month which is being distributed to close member banks who are gambling it on the Wall Street stock market to recapitalize themselves rather than lending it out into the economy so citizens can buy new homes, automobiles."
The example of paying back retirees with cheaper dollars illustrates the real costs of built in systemic inflation, not just for citizens on a fixed income, but also for everyone. This lost in purchasing value of the currency is obvious to any honest person.
Sardi states that, "The average social security check was $321 in 1980 and in 2011 it was $1183 (adjusted for inflation). But if that $321 pension check were to be fully adjusted for inflation according to way inflation was calculated in 1980 (cost of gasoline and food included), then that $321 should be $3636 to have the same purchasing power today."
The severity of income disparity has reached staggering levels. Elite insiders game the system with insider speculation certainty, while the constructive producers that keep the real components of the economy functioning, are pushed to the margins.
Bernanke’s real legacy produced the following outcomes. The always-reliable ZeroHedge site states some undeniable facts under Bernanke’s watch.

The banksters demanded a bail out because their derivative greed exacted losses that required an immense infusion of liquidity to rescue their balance sheets. Under Bernanke, the titans of finance have an unlimited line of near zero rate interest of new credit. When the establishment financial press applauds the savior of the economy, their loyalty towards corporatist governance, dictates that the economic interests and the public welfare of ordinary people is expendable.
Look to a prime example of this concentration of wealth and control. The Global 1%: Exposing the Transnational Ruling Class by Peter Phillips and Kimberly Soeiro, focus on BlackRock.

"BlackRock is one of the most concentrated power networks among the global 1 percent. The eighteen members of the board of directors are connected to a significant part of the world’s core financial assets. Their decisions can change empires, destroy currencies, and impoverish millions. Some of the top financial giants of the capitalist world are connected by interlocking boards of directors at BlackRock, including Bank of America, Merrill Lynch, Goldman Sachs, PNC Bank, Barclays, Swiss Reinsurance Company, American International Group (AIG), UBS A.G., Arab Fund for Economic and Social Development, J. P. Morgan Chase & Co., and Morgan Stanley."


These crony capitalists are the prototypes that benefited from Bernanke decisions.
During the Bernanke era, the debt bubble entered the point of no return to solvency. His place in the history of shame sets the stage for further economic turmoil. The Federal Reserve after Ben Bernanke article indicates that the Fed is boxed into a pattern that is likely to escalate out of control.

"With the uninterrupted, increase in federal debt, much of which is held by the Federal Reserve, the prospects of achieving prosperity by growing the economy, when interests rates have been near zero, failed miserably. It becomes almost absurd to believe that higher rates on Treasury Bonds will succeed. The new chair of the Fed will be hard pressed shutting down Quantitative Easing."

A depression in the real economy is preordained with the retraction of credit to most enterprises. This starving of access to funding is a conscious and deliberate strategy to force competition out of business. The grand scale that the banksters operate on has little room for upstarts or hanger-on’s. At the end of this very destructive Bernanke term, the rich got fabulous more wealthy, as the country sinks into decline on so many levels.


James Hall is a reformed former political operative. His website is BREAKING ALL THE RULES at www.batr.org.  BATR is a comprehensive view of the human condition. Populism best describes James’ approach and  perspective on politics.
Posted by Dennis Gallagher at 9:53 AM