REGARDING ISIS: A LETTER TO PRESIDENT OBAMA 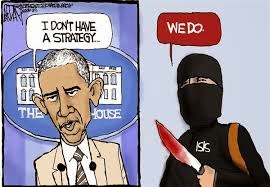 The following is a letter to President Obama from Cody J. Carbone, a J.D./M.P.A. student at Syracuse University.


I wanted to write to you to express my current feelings and opinions on the current state of our newest adversary, ISIS, the “Islamic State of Iraq and Great Syria”. I am not an expert, nor will I portray one in this letter. I am just a student, concerned, nervous yet optimistic. I assume the latter will dissipate with old age, but there are a few things I am confident I do know.

I know a few things sir, but I seek more. I am a 22-year-old law student, still describing myself as “precocious”, living off student loans and stocking my kitchen with store brand cereal; I splurge on the good milk. I do not know what its like to be you and I may never will.

A few days ago I watched you through my TV screen. You presented a soft look; beige suit, white shirt and peppered hair. You presented a hard truth; we do not have a strategy to combat ISIS.

I don’t know ISIS, but I have studied them. I know they thrive off publicity, mentions, tweets, posts, and press conferences. Mr. President, anytime they hear their name they become more and more legitimate. How do we discredit them sir? Aren’t we number one? Aren’t we the biggest and the most powerful? Why aren’t they scared? These are some of the things I don’t know.

We are fighting an ideology, much bigger than any army. We are fighting people who cannot be taught to think otherwise, people who learn their whole lives that death is better than life.  We are not fighting a war, but a mindset. They are beheading Americans, murdering children, blowing up schools. What is our strategy?

“We don’t have a strategy yet”. Mr. President, are they beating us? Are they thinking one step ahead of us? You have left me frightened, hanging on to a three-letter word like “yet”, and somehow you have simultaneously eased the minds of ISIS members across the globe. Why are they laughing at us now? I am not an expert Mr. President, but I know you could have done better. I know you will do better.

I will not discredit this letter by burning my political party’s seal on the outside envelope. Terrorism affects us all. This is a letter from a student to his leader, looking for guidance, looking for a strategy, looking for answers. I expect you will do better next time.

People will come up to me and ask me why I authored this letter. My answer is simple. I want you to know that I support you. Regardless of my political beliefs, you are my President. I want to believe in you. I want to think that next time you step up to that podium, I will be proud. I want to know we are working on something. I want to know that we have beaten ISIS.


I know you care Mr. President.

Cody J. Carbone is a J.D./M.P.A. candidate at the Syracuse University College of Law and Maxwell School of Citizenship and Public Affairs.  He is Vice President of the Student Bar Association. Cody can be reached at  cjcarbon@syr.edu.
Posted by Dennis Gallagher at 4:00 PM

Excellent letter stating exactly what most Americans are feeling!

The writer expressed my thoughts and feelings so succinctly and eloquently.

How we all feel..