SILENCING WHITEY: THE TRUTH OF THE BLACK LIVES MATTER AGENDA 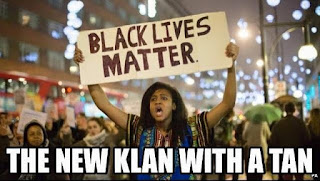 This following essay was authored by Mike Adams.  It is reprinted by permission from TOWNHALL


Recently, I have made some pretty charged statements about Black Lives Matter. In a nutshell, I have argued that the organization is not a pro-black civil rights group. Instead, it is an anti-white anti-free speech mob. Evidence of my contention isn’t very hard to gather. In fact, you have to have your head buried pretty deep in the ground in order to miss it.

As a free speech advocate, I can say without equivocation that I have never witnessed a more consistently censorious group than Black Lives Matter. Disrupting speech is not just a sideshow for them. It is the principal political tactic of the notorious uncivil wrongs group. It is their primary method of drawing attention to their cause because they lack the intellectual fortitude to persuade people to listen based on the content of their arguments.

It is difficult to avoid noticing the common thread when Black Lives Matter charges podiums, assaults speakers, and rips microphones out of speaker's hands. That common thread is not the subject matter of the speeches. It is the skin color of the speakers. The group does not censor its targets because of their political views, or their religion. Nor is their targeting based on the speakers’ sexual orientation. They select people on the basis of their race in order to accost them for their true crime, which is simply talking while white.

The problem for such racist extremists is that these tactics eventually backfire. By targeting white people with physical assaults and intimidation, they merely reinforce the racist stereotype that blacks are aggressive, assaultive, and violent. It is worth noting that such stereotypes are the alleged causes of black deaths at the hands of white cops in the first place. One might be tempted to say that the group renders itself useless by reinforcing the very notions against which they claim to be fighting.

Of course, to say that Black Lives Matter is useless is an undeserved compliment. They are far worse than useless. By running the police out of black neighborhoods, they are ensuring that black on black violence increases. Predictably, as the slaughter of black males increases, the problem of black fatherlessness increases. Consequently, every single negative social indicator skyrockets along with it. They are therefore destroying far more than their own credibility with their tactics. They are destroying their own communities and helping to kill their own neighbors.

Watching this whole sad, pathetic episode in progressive black history makes it abundantly clear that the principal problem in their community is not white racism. It is black culture. That is why it is imperative that we keep black racists from hijacking the national conversation and thereby keeping our attention focused on imaginary problems, rather than real ones.

True civil rights leaders have always understood that the remedy for injustice is more speech, not less. That is the reason why Martin Luther King succeeded. It is why Black Lives Matter racists will be nothing more than a sad footnote in the dark history of progressive intolerance.

Posted by Dennis Gallagher at 12:46 PM