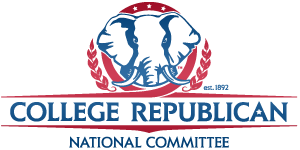 Founded in 1892 by James Francis Burke, the College Republican National Committee (“CRNC”) is an independent political committee, with over 250,000 members on more than 1,800 campuses nationwide.


The CRNC has a nationally elected chairman and officers who lead the organization, as well as support staff operating out of the national headquarters in Washington, D.C. Each state maintains its own federation with a state chairman and a leadership committee who work directly with the National Committee.

As the nationally elected voice for young conservatives across the country, the CRNC drives and defines the debate for College Republicans and bring youth-oriented issues to the forefront of the political discourse.